It doesn’t seem to matter what some people touch, everything just turns to gold. You either have it, or you just go home mate because you don’t. Bryan Scott (The Union Underground) is the gold finger in the case of newly formed American rock band Into The Fire. Conceived in 2013 this super group, if you like, has all the pedigree Class A blood it needs to succeed, as Joining Scott is Adam Zadel (Soil), Will Hunt (Evanescence) and Tim King (Soil). “I was sitting around with Adam one day talking about who it would be great to jam with”, states bassist Tim King. “I shot Bryan Scott a text message and Into The Fire was born”.

What has followed can only be described as raw stripped down rock with modern elements. I’m gonna go one step further and say it is authentic and commercially accessible, which makes it easier to digest. Scott knew exactly what he wanted to do and it’s clear from the two songs being released on the eponymous EP, ‘Spit You Out’ and ‘Medicine’, which will be out on the 30th of September as part of a special EP bundle that will include the first video.

The EP has great raunchy riffs with infectious vibes, and if you’re a fan of The Union Underground I guarantee that you’ll be hooked and reeled in, within the first thirty seconds of ‘Spit You Out’. Scott’s vocals are unmistakable and undeniably awesome as he snarls his way over the top of some deadly monster riffing, which I reckon could make for some very imaginative air guitar efforts. The thundering drums are immense and meaty on this one.

‘From The Medicine’ is slightly slower but no less catchy when it heats up. An intelligent and beautiful breakdown precedes an elevating solo which insights images of riding in a convertible with the top off and letting your hair down. The vocals are harmonised and tantalisingly sexy, adding to the atmosphere of the down and dirty, filthy, chunky guitar and rhythm section, which makes for the kind of rock you can’t get bored of – and that will never grow old or dull. Into the fire is an awesome debut EP that is very energetic and enjoyable, and which displays a lot of  promise for the future.

Into The Fire is released on September 30th. For more info, please visit https://www.facebook.com/intothefiremusic/?fref=ts

Tags Into The Fire

Into The Fire to Release Debut EP in September 2016 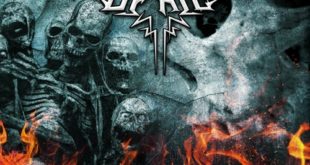 Destroyers Of All – Into The Fire