Manchester based Melodic death metal band Incassum have just released their debut album – Rite of Passage.  The band have previously released two demos and a mini-album (In Vain), and have built on this to create their album.

As a female fronted melodic death metal band then comparisons with bands such as Arch Enemy, Holy Moses and Mortad are inevitable, but while these bands may all share some similarities, they all have their own individual sounds.

Sharleen Kennedy’s powerful vocals are the centrepiece of the band’s sound.  As well as the growling vocals that are used most of the time there are also sections of clean vocals.  The guitars are good and heavy and with the strong bass and drums there’s a powerful relentless feel to the music, but it’s not all about speed or power – there is plenty of melody in here too.  The slower sections with the clean vocals are what helps the band stand out as different from bands like Arch Enemy.

It’s a promising debut album which is definitely worth checking out, but I think there is still some way for the band to go before they’ll be able to compete with the bigger bands in the genre.

I spend half my life at gigs or festivals and the other half writing the reviews and editing photos, and somehow find time for a full time job too. Who needs sleep - I've got coffee.
Previous Turbo + Hello Jackie @ Voodoo, Belfast – Thursday December 6th 2012
Next Breed 77 interview with Danny at HRH 6 – 02/12/12 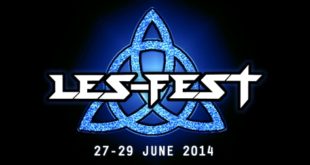