So, my second low key festival in July and as with Les-Fest in Scotland a few weeks earlier, came away completely blown away by the wealth of known and unknown talent on display. S.O.S Festival is now in it’s seventh year, set up by Rocksector Records owners Lynne Hampson and Mark Appleton, and it has gone from strength proven by both days in 2014. The admission prices were cheap as chips with a two day ticket only £15 and a day ticket at £10.

The Radcliffe Civic is of course indoors with a good sized  hall with the main stage (named after Dean Hocking, bassist for Nightvision who lost his life in a road accident almost two years ago) at one end and the acoustic stage opposite so there were no set clashes which was a big plus for me. Catering was fairly priced and quick along with the bar which was only a brief walk/stagger/crawl to the main hall and once again, fairly priced with excellent service. Due to check in times at my hotel I did not see the first two bands Amethyst and The Idol Dead,  but just caught the end of The Goddamn Electric‘s first of two acoustic sets followed by Lancaster based Bloodyard. This bludgeoning 4 piece band certainly raged hard with lead vocalist Donna Hurd contorting herself to bellow out some angry death metal lines. At their slowest Bloodyard reminded me of early Rollins solo material with a D.R.I punk delivery. Their forty five minute set slammed in with ‘Set To Fall’, all Morbid Angel churning riffs with Donna barking out the lyrics with a Max Cavalera like delivery. With no pause for breath two minutes aural of brutality called ‘Reclaim’ was next with some fast footwork from Matty Lee on drums. Song of the set for me was closing number ‘Dead Relics’, a deceiving calm before the storm intro was followed by some intense thrash metal with the most brutal vocal of the set. The second acoustic set from The Goddamn Electric gave a brief respite with their three songs ‘Morning Injection, ‘Snakebite’ and ‘Scarecrow’. Highlight for me was ‘Loyal To The Sinner’, opening song of the first set. The big power chords of the electric version are stripped right down to the bones but the song is still as intense with a gritty vocal from Tommy.

Belgian metallers Eternal Breath who had traveled from their hometown of Wielsbeke were next and following their frantic melodic thrash opening instrumental lead into the full on metal of ‘Vengeance For Our Disrespect’ with towering vocalist Andy Polfliet commanding the stage. ‘My Life Force’ followed, another high energy number with tinges of NWOBHM. Highlight for me was ‘The Joker, drum driven power metal Manowar style with a majestic vocal delivery. Their all to short set ended with ‘Your Pissing Me Off’, with plenty of crowd participation. Manchester based four piece Asylum City Zoo had a tough act to follow but their five song set with it’s heavy bottom end thump coming over like a heavier version of Clutch stood them in good stead and I spotted a fair few of the crowd wearing their tshirts. The Clutch influences came to the fore with opener ‘Circus Of Souls’ with it’s steamroller grooves backed by some off kilter drumming. Highlight for me was ‘5 x The Pain’ with it’s Prong like guitar riffs, a heavy end to the set and to make their set even more metal, their bassist wore a kilt and a Manowar tshirt!

And now a highly anticipated set for me from Dutch metallers Lord Volture. I reviewed their last album ‘Never Cry Wolf’ just over three years and S.O.S Festival was their first UK gig. Lead by hyperactive front man David Marcelis, their seven song set was a master class of melodic power metal. The thumping drums of Frank Wintermans dominated opener ‘Where The Enemy Sleep’ as the heavy  chugging riffs gave way to some speedy twin guitar solos midway. Song of the set for me was following song ‘Taiga’. At seven minutes long the two minute instrumental intro was in the vein of Manowar, very epic with some heavy double bass drumming. David’s soaring vocal put the seal on the song as it went into raging guitar solos and multi time changes. A new song called ‘Taklamakan’ from their 12th September release Will To Power album showed great promise. Set closer ‘Hearts Of Steel’ from debut album Beast Of Thunder was easily the heaviest song musically with the vocals heading off into the stratosphere!

Even though I only saw Captain Horizon a few weeks earlier they still mesmerised at SOS. Their melting pot of songs bringing to mind Tool, early Faith No More and U2 to name but a few. Kicking off with ‘The Light’, it’s lengthy instrumental opening paved the way for the controlled lunacy of frontman Steve Whittington who seems to act the the songs, not just sing them. At least 3 new songs were played,  closing number  the haunting Floyd like ‘The Dark’, alongside the quirky ‘Can’t You Feel What I’ve Become?’ and the folk rock of ‘It Matters To You’ with Steve on additional acoustic guitar whilst making the quip “We are not just a one trick pony but still shit”. Looking forward to their next gig already. Things were to get a lot heavier now with Manchester based progressive metal band Spires, the first time I have seen these and another example of the talent the UK has to offer. Spires write long songs. In fact, Spires write very long songs and fitted in three in their forty five minute set. The first thing that struck me during opener ‘The Fevered Spirit’ were the similarities to Opeth which is no bad thing but it is not plagiarism. It’s eleven minute span started with a two minute death metal tinged progressive instrumental joined by the majestic vocals of Paul Sadler. The song went through a multitude of emotions ending with a full on metal ending. The marathon length of ‘Ethereal Organisms’ lead to set closer and my highlight, ‘Broken Hourglass’. It’s thirteen minute duration highlighted the Opeth style of light and heavy vocals in the verses. The drumming of Chris Barnard is worthy of mention here as his sparse patterns during the verses and some furious pounding in the heavy sections stood out. The virtuosity of all 4 made the duration of the song fly by and their set was the first with new guitarist Richard Corrie.

Next band Incassum, another I had recently seen,  delivered another crushing set albeit a longer one at SOS. Opening with ‘World’s Fear’, the almost alt metal intro went into technical thrash as the distinctive vocals of Sharleen Kennedy hit hard. The switch between clean and growled vocals seemed effortless and there is no dip in quality from start to finish. There is no pause for breath as the intense grinding riffs of ‘Blood Soaked Banner’ get the crowd’s attention and following number ‘Redemption’ rolls dynamically out of the p.a system like a shorter ‘Grand Conjuration. As it was at my last Incassum gig, set highlight is still ‘Walk Alone’. At seven minutes long, the haunting build up heavies up midway into a high speed ‘Imperium’ type finish. Set closer ‘Cut Loose’ certainly does as the adrenaline rush rhythms coupled with Sharleen’s most vicious vocal make it near impossible to headbang to!

When London based Monument hit the stage running, after just a few bars from opener ‘Renegades’ the first notes  I made were “No holds barred British heavy metal” as the five piece went straight to the lip of the stage and for the following forty five minutes, that is how it stayed. Fronted by iron lunged, charismatic lead vocalist Peter Ellis, the crowd lapped their set up. It is impossible to avoid the Iron Maiden influences with the twin guitar attack but Peter does sound uncannily like Bruce Dickinson with a delivery full of conviction. The Maiden influences came to the fore on ‘Runaway’ which was like a harder, faster rendition of ‘Twilight Zone’. Their set consisted mainly from their very metal debut album Renegades except for their excellent cover of Deep Purple’s ‘Black Night’ which Monument recorded for inclusion on a tribute album for sadly departed Deep Purple keyboard player Jon Lord. Other set highlights were the Manowar like ‘Crusaders’ as the melodic twin leads gave way to marching rhythms akin to ‘Blood Of My Enemies’ with Peter hitting notes which would have Eric Adams looking over his shoulder! Set highlight for me was set closer ‘Rock The Night, not a cover of the Europe number but chugging thrash metal featuring the most ear piercing vocals of the set.

Savage Messiah seem to play tighter each time I see them and their S.O.S set proved my point. The crowd intensity levels were raised as Savage Messiah delivered the heaviest set of the day as they opened  with ‘Iconocaust’, a 6 minute number off their latest album The Fateful Dark. It’s galloping rhythms of catchy thrash metal topped with some furious drumming from Andrea Gorio. Other highlights were ‘The Cursed Earth’, like a thrash version of ‘Where Eagles Dare’, this was another song from the latest album showing their confidence in the new material. ‘The Minority Of One’ highlights that the even when they drop the pace, the song still hits hard and ‘Insurrection Rising’ with it’s Exodus like crunching riffs backed by more over the top drum patterns and scorching guitar solos. Savage Messiah gave headliners Absolva a hard act to follow. Their 75 minute set allowed them enough time to deliver a 14 song set of no frills heavy metal, showing they were worthy headliners. Lead by the lead vocals and guitar wizardry of Chris Appleton who peeled off solo after solo, he was joined on second guitar by his brother Luke who now plays bass guitar for Iced Earth and to make it even more so of an occasion, Absolva were a three guitar line up when they were joined onstage by Doug Scarratt from Saxon for the last three numbers.

Their  set was split between the debut Flames Of Justice and the latest album Anthems To The Dead with an emotional encore of ‘Heaven And Hell’ which brought the house down. After an intro by Chris of “We are Absolva and we play heavy metal” a supercharged version of ‘Devil’s Mouth’ featuring the first of many over the top guitar solos by Chris. Other standout tracks were ‘Killing Season’, a riff heavy melodic number with a big chorus sang by the band. ‘Only When It’s Over’ could be Absolva’s ‘Love To Love’ by UFO as it’s emotional verses lead up to two guitar solos befitting the mood of the song. ‘Taste The Blood’  had riffs and rhythms in a ‘Green Manalishi’ vibe with Chris, Luke and bass guitarist Dan Bate leaving the stage midway to allow drummer Martin McNee to batter out a pummeling solo and as said earlier, the final three songs saw a guest appearance by Doug Scarratt on ‘Soul Remains’, ‘Never Back Down’ on which he delivered a firey solo and the cover of ‘Heaven And Hell’ with Chris taking the first two solos and Doug shredding the song to a close with a highly charged crowd applauding the end of a very metal set.

Special thanks goes to Morticia photography for use of their pics. 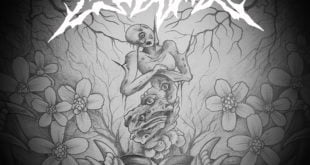 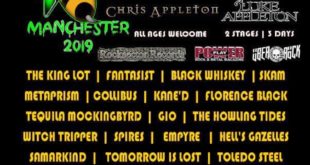