Incorruptible, the twelfth studio album by Iced Earth is another strong release spearheaded by founding member Jon Schaffer who formed the band in Tampa Bay, Florida 1985. After a few plays, two songs midway let it down a bit so it has not got a full five out of five mark but lets concentrate on the positives.

A spine tingling intro to opening track ‘Great Heathen Army’ precedes an early Manowar like slab of pummeling battle metal. The standard is kept high by follower ‘Black Flag’. An Eastern tinged intro riff is taken on by the rest of the band that segues into a brooding chug with lead vocalist Stu Block hitting some stratospheric high notes as the pace picks up with the lyrics portraying the pirate theme. ‘Raven Wing’ is an atmospheric pounder with the vocal practically crooned over the hard hitting riffs before Stu hits his stride with a lung busting performance.

‘The Veil’ is the nearest they get to a power ballad here but the crashing riffs and soaring vocals keep it well away from AOR territory. ‘Seven Headed Whore’ is a short, sharp drum driven sure fire mosh pit opener with its rasping riffs and unholy shrieks from Stu pushing the recording levels into the red. The lyrics in ‘Brothers’ are belted out with conviction during this epic opus. The huge chorus and melodic lead breaks are the icing on the cake. ‘Defiance’ is a go for the throat riffer that gives left and right jabs to the ears. A deft guitar solo midway precedes throat shedding screams.

The album ends on a high with my personal highlight ‘Clear The Way (December 13th 1862)’. It tells the tale of the involvement of an Irish brigade during the American Civil War. A majestic intro builds up to some of Jon’s finest riffs on the album. Once again, another fist clenching lead vocal hits hard with a lengthy mid section instrumental riddled with Celtic influenced passages. Battle themed samples add to the mood as the main riff returns to bludgeon the song to a gripping end.

Incorruptible is currently on release via Century Media Records. 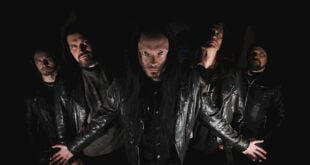 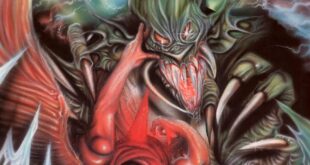