Version:
CD
Reviewed by: Ant May

Dissonance are releasing three reissues from Finnish legends, Hanoi Rocks.  The three releases are their first two studio albums, “Bangkok Shocks, Saigon Shakes, Hanoi Rocks” and “Oriental beat” along with their 1984 live album “All those wasted years”.  Hanoi Rocks combined punk and glam rock and were making a big impression till in 1985 their drummer Razzle was a passenger in a car driven by Motley Crue’s Vince Neil who crashed the car while under the influence of alcohol and Razzle was killed.  After that Hanoi Rocks sadly split before eventually reforming in 2001 and finally calling it a day in 2008.

The early studio albums include some great songs – “Tragedy”, “Motorvatin” and “Oriental beat” in particular being great songs that the band was still playing at the end of their existence (and still get played occasionally by Michael Monroe).  That punk edge that helped the band stand out from the Glam rock bands coming from Los Angeles still helps them as the music still feels fresh and distinctive which is quite a feat given how many bands since then have rehashed pretty much everything so there’s very little these days that sounds truly distinctive.

Unlike the Girlschool albums that Dissonance are recording, these Hanoi Rocks releases are bare-bones reissues with no bonus tracks at all which is a disappointment, especially since the Japanese reissues that came out a few years ago did include a number of bonus tracks.  As a result these reissues are unlikely to be of any interest to fans who already have the albums, but if you haven’t got these albums in your CD collection then they’re definitely worth getting.

All those wasted years

The reissues of “Bangkok Shocks, Saigon Shakes, Hanoi Rocks”, “Oriental beat” and “All those wasted years” will be released on 24th March 2017

All those wasted years

I spend half my life at gigs or festivals and the other half writing the reviews and editing photos, and somehow find time for a full time job too. Who needs sleep - I've got coffee.
Previous Girlschool – Reissues
Next Wednesday 13 adds Dublin/Belfast shows 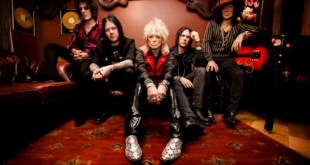