January – and especially the middle of the month – is a notoriously difficult time of the year, with most people still recovering from the needless over-expense of Christmas and counting the minutes until their next pay day… so, it is extremely rewarding for those promoters who dare to venture into the unknown wasteland of this financial desert to see their dedication and risk-taking receiving a healthy return, as a near capacity crowd has braved the equally meteorlogically chilly evening to catch this eclectic bill of local rock and metal talent.

Now, PM is a great believer in, where possible, turning up early to catch as many of the bands as possible, and that policy was well and truly rewarded by the performance from this evening’s opening band, the youthful Ozymandias (https://www.facebook.com/ozymandiashrband).  The four teenagers look visibly nervous but get off to an enthusiastic start with their opening, self-titled opener, which has an early 70s-infused classic metal feel, with an Iommi-esque guitar sound.  However, their choice of covers, together with a mid-set change in direction with the punkier, spikier ‘Give Me A Reason’ shows the need for this young outfit to consolidate on one style, as at the moment they lie somewhere between traditional hard rock, pop punk and latter-day stoner grunge.  Nevertheless, this was an impressive set from a young band who certainly know how to play and possess the enthusiasm to move forward quite quickly.

Donum Dei (https://www.facebook.com/pages/Donum-Dei/144914665575849) are undoubtedly one of the fastest rising young metal bands in Northern Ireland and, having enjoyed a tremendous 2014, which really had seen them come on leaps and bounds, this evening they obviously were intent on making an extremely strong statement of intent for the coming 12 months.  Opening with the very Metallica-esque ‘No Escape’, it only takes until the second song, ‘Gravelands’ for necks to start snapping and the throwdowns to start, well, getting thrown down.  New song ‘Terrorize’ sees the young quartet introducing a more hardcore edge to their sound, which works well and shows their continuing development, while erstwhile set favourite ‘Justice Fails’ delivers an incendiary firebomb that sees the pit well and truly erupt for the best response I have seen to the best show DD have played in the 18 months or so I have been following them.  A hugely confident performance from an outfit who are equally increasing in confidence and professionalism with every outing.

The latter half of 2014 had been a period of transition for headliners Baleful Creed (https://www.facebook.com/BalefulCreed), following the release of their debut album earlier in the year, with their entire rhythm section having departed (on good terms it must be emphasized) for pastures new… This is the first time that the PM has caught the band with the new line-up, and it must be admitted that, initially, the two new recruits – drummer Dave Jeffers and bassist Davy Greer – while tight and accurate are initially somewhat more clinical than their predecessors.  However, this may be down to teething issues, as, as the set progresses, the band evolves into something of a more organic whole, with their usual lugubriousness shining through by the time the likes of ‘Crazy Man’ and ‘Baelful Creed’ rumble from the speakers.  With John and Fin still very much at the heart of the band, the songs – especially the likes of the towering ‘Forgiven’, the dark and moody sweep of ‘Thorazine’ and the enervating closer ‘Autumn Leaves’ – retain every ounce of their power to enthral their audience.

Footnote:  So, what is Mr T’s favourite type of yoghurt?  Why, Petit Filou of course! 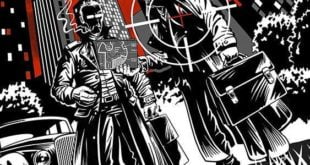