Another year, another stupendous Rockwich returns! Organised by Prometheus Promotions, they managed to book twelve top quality bands to play in 12 rocking hours. Midday opening act, Wakefield based The Sourheads, fronted by the barefooted ball of energy Jake who looked like he was born to be onstage, ripped through a fiery thirty minute set akin to a heavy metal alarm clock. Aptly titled ‘I’m Rock n Roll’ came over like early Stooges followed by some seriously piledriving grooves that propelled along ‘Don’t Get Caught (I Am The Lotus)’. Pace was lowered, but not the intensity as ‘Secret Cigarette’ had a hypnotising main riff and militaristic drum patterns. A dollop of early afternoon sleaze came from ‘Demon’ with a trippy Doors like midsection and their set closed with the slow burning, emotionally charged vocal of ‘Mad Dog’, ending with a full on workout.

A quick band change over from a very well organised stage crew saw Liverpool based Black Cat Bones blow the cobwebs from the venue. ‘Seen Better Days’ was like a more laid back ‘Kill The King’ by Rainbow with a lung busting vocal from Jonnie Hodson. The heavier ‘Give You The Word’ was belted out with Myles Kennedy like gusto. The Southern rock tinged ‘No Secrets, No Lies’ was full of intense lead guitar solos and that vibe carried on via ‘Devil You Know’. The harmonica backed heavy blues of ‘The River’ was a laid back calm before the storm of set closer ‘Silverline’. It was a blur of high energy riffing, ending with a piercing outro solo.

Ryders Creed raised the bar higher with set opener ‘Ryder’, coming over like the heavier side of Nazareth. The rich, soulful vocals of Ryan Hulme gelled with the tough dynamics of ‘River Man’ that lead into the heavy jams of a new song ‘Rise’, the first of two played, the other being ‘Headspace’. The punchy riffs in ‘Begging For More’ and the “Let me hear you scream” request from Ryan was answered loudly! The Voodoo Chile like intro to set closer ‘The Devil’s Road’, a blue grass like tune with cheesy but fun crowd interraction.

I’ve seen Blackpool based The Senton Bombs a few times now and as usual they did not disappoint. As if the venue was not hot enough, opener ‘Black Chariot’ pushed the temperature higher with master of ceremonies Joey Class leading through its gritty, almost heavy country vibe. ‘Mainstream’ put the hammer down, as did the drum driven ‘Train Wreck’. Set closer ‘Nothing Quite Like This’ filled the room with a huge party atmosphere but, as always, their ace in the pack is the overwhelming ‘Darkest Horse’, practically an almost perfect rock song.

The room began to shake from the onslaught provided by Baleful Creed, coming from Belfast to test our hearing. The floor seemed to rise as opener ‘Devil’s Side’ was a lengthy, rumbling blast of doom. Hard hitter ‘Memento Mori’ defined the meaning of ground and pound. ‘God’s Fear’ was downtuned heaven to these ears and there was no let up as the early Motorhead like blustre of ‘Forgiven’ was let loose. ‘Lose Religion’ was catchy, but still crushing as closer ‘The Wolf’ sped along to be a real rib rattler.

Lead by the charismatic Lewis Phillis on lead vocals and guitar, Nottingham based Beckon Lane began with ‘Breathe’, all heavy metal but with more hooks than a fishing tackle shop. The UFO tinged class of ‘Truth In The Lie’ provided the starter to the main course of ‘Justify’, an intense power ballad and my highlight of their set. ‘Fire’ brought back the power, introduced as “A feisty one” as their all to short set climaxed with the majestic hard rock of ‘Fair Enough’ featuring huge choruses.

Beth Blade and the Beautiful Disasters with frontwoman Beth Blade being more beautiful than disastrous hit hard and heavy with the aptly titled opener ‘Hell Yeah’. Its ballsy riffing raised the roof. The meaty grooves of ‘Bad Habit‘ provided loud crowd interaction. Set highlight for me was the anthemic ‘If Your Ready To Rock’ with the killer chorus of “If your ready to rock, we’re ready to roll. Turn it up to ten on the radio”. Final tune ‘Forbidden Hearts’ was smashed out like early Crue. A very impressive set featuring guitarist Luke Strickland, his first gig with them after only two rehearsals.

My second Hell’s Addiction gig in as many weeks proved to be another weekend highlight. The impressive vocal range of Ben Sargent cut through the air during opener ‘We’re On Fire’, a high octane drum dominated piece seeing him hit some long, high pitched notes with ease. Drums from Luke Morley came to the fore once more for the full on, no frills ‘On The Road Again’. Pint glass worrying screams and wah-wah guitar solos brought the metal to ‘Time Has Come’ and they got the floor bouncing with the heavy chug of final song ‘Holiday’.

Stoner heaven returned with Sheffield noisemongers Regulus providing the soundtrack. Fronted by the utterly bonkers Luke Jennings, the feedback drenched ‘Blunderbuss’ was a suffocating set opener, matched in doom by ‘Dutch’ which strangely brought to mind a stoner version of ‘Seek And Destroy’. ‘Bones’ was a lumbering beast of a song that lurched into gear for a heads down ending. ‘Dominion’ twisted and turned on a dizzying array of riffing as ‘Quadralith’ was a final blow to the senses with the quirkyness of early Kyuss that speeded up to an eye of the storm finish.

Heading South all the way from Glasgow, Mason Hill are definitely a band to keep an eye on judging by their performance today. They eased into their stride with the heavy blues of ‘Broken Son’, featuring some tasty guitar work from James Bird and Marc Montgomery and fronted by the effortlessly cool lead vocalist Scott Taylor whose youthfulness seems to belie his mature stage presence. The heavier ‘Your Memory’ suffered from the vocals being absent from the front of house p.a but the glitches were solved in time for my set favourite ‘Out Of Reach’, a rollercoaster ride of emotions. Brand new track ‘Blame’ ran along on a catchy, rolling main riff that bodes well for their forthcoming album, followed by the demolition ball wrecking grooves of ‘Now You See Me’. Set closer ‘Where I Belong’ is another fine example of their songwriting maturity so early on since forming, a soon to be classic with breathtaking guitar solos and a passionate outro vocal . A well deserved encore saw a faithful run through of the Audioslave classic ‘Cochise’, dedicated to Chris Cornell. A big song that they well and truly nailed!

It was time for more sleaze as Lincoln based Knock Out Kaine, fronted by the confident swagger of Dean Foxx stepped up to the plate. ‘Sixteen Grams Of Heart Attack’ was a kick ass opener featuring some over the top guitar virtuosity from Jimmy Bohemian. Their strong set featured gems such as ‘Fire And Smoke’, all catchy grooves and more guitar heroics. ‘Coming Home’ was a hard as nails John Cougar like epic and their song writing suss was yet again proven by the storming Crue tinged ‘Little Crystal’. Set highlight was the sugar sweet pop rock of ‘Flying Blind’. Close your eyes and you would swear Cheap Trick had come to Lostock!

The power of the riff was taken on by Screaming Eagles, the second band of the day who had ventured all the way from Belfast. The AC/DC and Rose Tattoo influences were there to see but it’s what you do with the riffs that matter and guitarist Adrian McAleenan proved my point. Fronted by the effervescent Chris Fry, they opened with the ‘It’s A Long Way To The Top’ tinged ‘Blood’, that had the crowd in the palm of their hands effortlessly. The main riff in ‘Ready For The Fall’ got into your head immediately and never left until the full on boogie cover of ‘Roadhouse Blues’ had us screaming the refrain of “Woke up this morning and I got myself a beer” with gusto. ‘Breakin All The Rules’ strangely brought to mind High And Dry era Def Leppard with its melodic, headbanging riffing but my killer song was the room shaking, riff laden boogie of ‘Rock And Roll Soul’.

Headliners Massive Wagons, as usual, made them feel like you were their best friends playing at your private party. The ball of energy that is Barry Mills covered every inch of the stage in set opener ‘Back To The Stack’, their tribute to the sadly departed Rick Parfitt. The huge crowd lapped up every note of their uplifting hour onstage, getting our tired limbs and voices moving. A huge crowd vocal during ‘Tokyo’ made the hairs on my arms stand up and ‘Nails’ was all about the superhero drumming from Alex Thistlethwaite. Two brand new songs were aired today. First up was ‘Last On The List’, another addition to their arsenal of foot tapping heavy rock, as was ‘Under No Illusion’ which curiously brought to mind the grooves of ‘Growing On Me’ by the Darkness. Time went too fast as one two knockout punches of an over the top ‘Red Dress’ was followed by the hilarious ‘Fee Fi Fo Fum’. Curfew time drew near and concerns about an encore were quelled as they returned with a rampant cover of ‘Thunderstruck’. Another killer performance, I’ve yet to see them disappoint and I very much doubt they ever will.

Huge thanks go out to Mik Matzen and Colesia Pryce from Prometheus Promotions for this annual event, the hard working staff running around all day and to Simon Dunkerley for the permission to use his Massive Wagons photo. See you all next year! 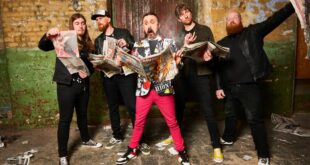 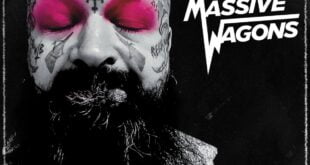 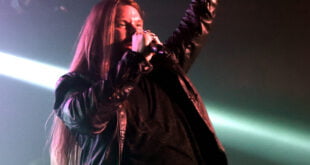