Airbourne hit the heights with their strongest album to date. 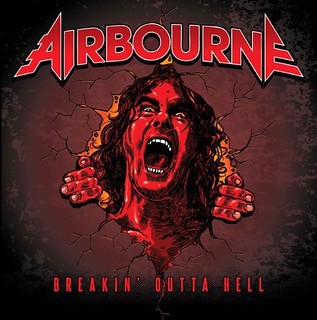 Airbourne are a band you can rely on to put a smile on your face whilst you headbang like a loon and with Breakin’ Outta Hell, their strongest album to date, get those neck muscles ready when its released via Spinefarm Records on September 23rd 2016. Their fourth studio release manages to squeeze in eleven tracks at just under forty minutes with no let up from start to finish.

They are not trying to reinvent the wheel and still stick to a winning formula of good time rock and roll. Of course the AC/DC and Rose Tattoo influences remain but at the end of the day, its a great combination. Of course their forte is playing live and I’ve seen them tear up small venues and festival stages but Breakin’ Outta Hell is as raw as you can get to seeing them play. Front man Joel O’ Keeffe pushes his rasping lead vocal to the limit to his lyrics which were probably written on beer mats in the pub!

The title track kicks off the album with a ‘Running Wild’ like main riff and the first of many lung busting vocals. Second track ‘Rivalry’ eases the foot off the gas pedal with a ‘Cochise’ like heavy blues groove. The crashing power chords, vitriolic vocals are matched by a massive chorus. Other highlights are the anthemic ‘Its Never Too Loud For Me’ with the conviction shown in a vocal of “Rock and roll ain’t a crime, it ain’t nothing but a good good time”. ‘Thin The Blood’ is a full on raging drinking tour de force and the listeners neck muscles are tested on ‘Down On You’. If the risque lyrics and riffs don’t get you on your feet, then go back to your Nickelback albums!

‘Never Been Rocked Like This’ is probably the nearest Airbourne will get to writing a love song but this is a rollicking riffer, not a wimpy lighters in the air number. The beer influenced ‘When I Drink I Go Crazy’ does what it says on the tin (pardon the obvious pun) with the opening line of “I’ve had a long long day so tonight I need a drink, don’t ask why, I don’t wanna think” as the album ends on a high note with the heaviest  riffs on the album  and double entendre laden lyrics of ‘Do Me Like You Do Yourself’ and the fist clenching chorus in ‘Its All For Rock N’ Roll’ of “All for one, one for all, together we stand, together we fall”.

It’s Never Too Too Loud For Me.

I’m Going To Hell For This.

When I Drink I Go Crazy.

Airbourne hit the heights with their strongest album to date.
Share 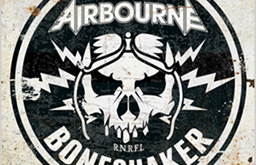