We reached out to UK Metalcore crew WOLVES DON’T SLEEP, who release their new single, Hope Won’t Set You Free, on 3rd August.

What is the full band line-up, who plays what?

The band formed in 2015 as a project by Steev and Chayce to write what we wanted and as an emotional venting place lyrically for Steev. Connor was in as soon as we started live rehearsals and after many lineup changes over the years this should be the definitive lineup.

At the beginning of 2018 when we really started looking at what we wanted to be as a band, we are all friends and hang out outside of the band anyway and get on so we are a solid unit, we are the Lowdham Hate Crew.

Bullet for my valentine, Lamb of god, Attila, Killswitch Engage.

Where did the name of band come from?

From the phrase “wolves don’t lose sleep over the opinions of sheep” cause from the get go we decided we’d do exactly what we want regardless of anyone or anything.

How far back does your history with each other (the band members) extend? are you friends from school or any family relations?

Steev and Connor went to school together and formed a band, Chayce and the Dan’s used to be in bands together and when we were gigging in our teens we ended up bumping into each other at local gigs.

None of our songs sound the same and we can’t really place our style within obvious sub genre contexts so we use “metalcore” as a broad description and live we go in as hard as we can and don’t stay on the stage, not to mention Steev’s makeup that gets reactions before we’ve even started playing.

If a deaf person were to ask you to describe the sound of your music, how would you describe it? An emotional rollercoaster and at points you are hit in the face with a shovel but still having fun. 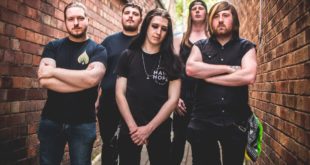 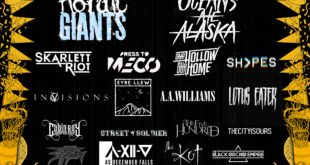