When Nick Oliveri left the stage of this very venue a little more than four months ago, he confidently predicted that the next time he appeared in Belfast it would be with Mondo Generator… little did most of those present realize that the touring schedule was already locked in and the man knew that it was no empty promise.  And not even the horrific events of the recent past – events which struck close to Oliveri on both a personal and artistic level (as revealed in our exclusive interview) – could prevent him from fulfilling that pledge. 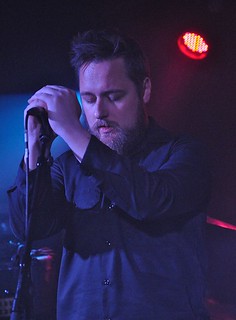 Local dark groovers Zlatanera are tasked with warming up the early comers, the few that there are, and do so worthily with the tight riffs and taut, dense melodies and rhythms, all delivered with their characteristic intensity and menace.  The centre-piece of their set, as ever, is the epic ‘Satan’ trilogy, which demonstrates their adept use of density and darkness counterpointed with just the slightest hint of tongue-in-cheek melodrama. 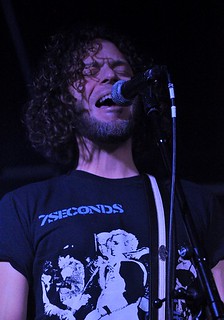 Until this gig was announced, I thought that Komatsu was a type of bulldozer (which, of course, it is) – but this is a rock gig and not a construction site, and in this case the possessors of that monicker are a stoner crew from the beautiful Dutch city of Eindhoven (where, coincidentally, this particular Mondo Generator tour had kicked off a few days previously, albeit without the main support act).  Right from the off, frontman Mo Truijens tries to encourage the miniscule – in fact, virtually non-existent – “crowd” forward and closer to the stage, insisting that “we don’t bite!”.  Only a couple decide to test the veracity of his statement.

Nevertheless, the Netherlanders deliver an impressive 45-minute set of dense and dramatic downtuned sludgy doom with an early-70s psychedelic edge, built on deep, thrumming rhythms, which in turn are matched by winding main melodies and sharp riffs.  It’s a sound that evokes the smell of stale marijuana in a Dutch canalside bar the morning after a heavy session of Heineken and jenever.  In among the intensity, and despite the small number of people enjoying their set, the quartet are obviously having fun as they showcase a number of tunes from their just-finished new album, ‘Recipe For Murder One’.

Setlist:  Rose Of Jericho / Lockdown / Scavenger / New Low / The Sea Is Calm / Gator / A Dish Best Served Cold / So How’s About Billy? / Komatsu / What The Fuck / Recipe For Murder One / Blackwater 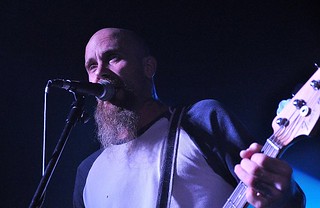 Turning the clock right back to the start of the Mondo Generator career, ’13th Floor’ sees Oliveri, guitarist Mike Pygmie and drummer Jeff Bowman get things off to a fast, furious and intensely passionate set – and the dozen or so fans now gathered at the front of the stage are quickly into the groove as well.  The inclusion of a couple of Kyuss and Queens Of The Stone Age “covers” – namely ‘Love Has Passed Me By’ and ‘I’m Gonna Leave You’ respectively – early on may seem a bit anomalous, but it is obvious that the diehard gathering wants to hear them, Oliveri knows, through experience that they want to hear them and, above all, he enjoys playing them… his way!

This is Oliveri unleashing his anarcho-punk alter-persona, as he spits his lyrics with an unbridled and unrestrained venom.  Behind the kit, Bowman, who replaced longtime sticksman Hoss Wright earlier this year, is a demon unleashed, but in perfect time and syncopation with his rhythmic partner.  Stage left, Pygmie writhes and grooves, cadencing his guitar through the punk stabbings while adding in layers of sublime and understated shredding.  And, there is also a surprise (outside of the nuanced selection of the set):  front and centre all night is former MG guitarist Simon ‘Spud’ Beggs, who cannot think of a better way to spend his birthday than getting drunk with his old friend and sidekick, who reciprocates by leading the audience in the traditional refrain for such occasions, before epitomizing the feel of the evening with the angry, adrenalized dose of punk rock fury that is ‘Dead Silence’. 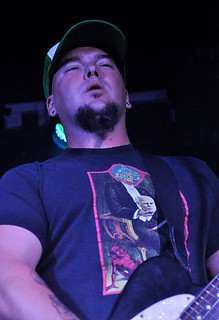 The crowd may be one of the smallest ever to have graced this humble little venue in a while, but they are vociferous and enthusiastic, and they are determined to wrench every ounce of musical sweat from the band, who genuinely seem at a loss as to what to play for their encore, before deciding on a suitably manic ‘Like You Want’… and gives everyone what they want and just the way we like it…

Setlist:  13th Floor / Love Has Passed Me By / Fuck You I’m Free / I’m Gonna Leave You / The Last Train / All Systems Go / Shawnette Jackson / Green Machine / Simple Exploding Man / Dead Silence / Eccentric Man / The Void / You Think I Ain’t Worth A Dollar But I Feel Like A Millionaire / Allen’s Wrench

I have mentioned the tiny crowd which was present this evening.  Now, there could have been any number of mitigating factors – it being two days before pay day most obviously perhaps being one of them.  But, indulge me for a moment… Some time over the next year or so, Queens Of The Stone Age will pull into a town, perhaps not too dissimilar to this one, perhaps on a week night, and pack 8,000-plus people into an atmosphere-sapping arena (and, quite possibly, charge those same people a small fortune for needing a magnifying glass to see them on a stage several hundred yards away).  Tonight, one of the band’s key former members played to less than one per cent of that number, on a tiny stage, in an equally tiny, sweaty back street pub.  He had no fancy stage show or production:  just himself and two other like-minded musicians doing what they love and what they do best – playing honest-to-goodness straight forward rawk ‘n’ roll!  I know where I’d rather be – and it ain’t among the “we have to be seen at this gig cos it’s cool and good for our street cred” hipsters;  nah, it’s down among the true dirty ass devotees, so close to the artist you can smell the Guinness off his breath and feel the passion for what he does oozing from his pores! Maybe next time Oliveri pulls into town, whether it with MG or one of his numerous other projects, some of those hipsters might put down their £10-a-pint silly percentage proof craft beers and dare to be seen in a really cool and street-cred friendly place – a proper rock ‘n’ roll gig in a proper rock ‘n’ roll venue… 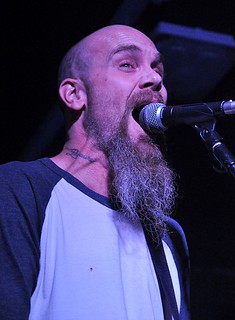