Idolos offer up Ahi Cab, a 4 track EP of old school black metal for the new generation. Hailing from a Pulsar in the outermost reaches of the Milky Way via France; Idolos is a 2 piece black metal band. If one is to believe the press blurb around them, they are alien entities wishing to communicate with like-minded spirits here on Earth.

Oooh…. as a lover of all things alien and sci-fi, this had me interested immediately. But what will they sound like? Something we haven’t heard before? Industrial BM loaded with electronica in the vein of other French bands such as Mysticum and Blut Aus Nord? Vicious, crazed experimental blackened death?

Well, the four tracks on offer here give us the following:

Prolog is an instrumental just over two minutes long, that sounds like the theme to a sci-fi horror movie. Echoing guitars and voices muttering away in French, with a few electronic embellishments. This sounds like it was recorded in the vast gulfs of interstellar space. hopefully setting the scene for something quite exciting.

What the three remaining tracks do give us after all that teasing, is actually like stepping back in time. The first of these tracks entitled The Deeds Above is reminiscent of Dark Funeral around the “Vobiscum Satanus” era. Combining harsh rasping vocals with low croaks, that sound like they were recorded in a nice big dark cave or tunnel. Typical tremolo-picked black metal riffs and lots of old school 1990s atmosphere. The highlight here is the inclusion of a rather splendid and tuneful guitar solo around the 4:30 mark.

Next up is The Summoners. This channels the spirit of the likes of Burzum, Deinonychus, and Bethlehem, with pained, shrieking vocals, dripping with anguish. Quieter, simple melodic passages give a respite before a harder angrier movement crashes in and drags the listener through depths of space and time unknown.

Finally, The Maiden And The Tree continues the journey with subtle melodic riffing, and more lamenting and haunting vocals.  This track does once again show that Idolos have an ear for the more sublime elements of music, as the track fades out to a pleasing, soft guitar melody.

There are some things here that do detract from making this a good piece of music, to an exceptional piece. First, all the main songs are pretty much at the same tempo, Apart from the above-mentioned highlights to each, the songs can blur into one.  Some more jarring changes in time signatures would help massively. Secondly, you will notice I have name-dropped several other bands in here. Idolos at present doesn’t really have an identity that they can call their own.

With the back story behind them, these guys could push a more unique style in here and reap the benefits from it. But as a first effort, it is decent enough, and of suitable length. Anymore would start to get repetitive, and make the listener lose interest.

Overall, the three main tracks do give us a helping of competent, well played black metal. With their subtle use of atmosphere, you can quite happily drift along with this, whilst enjoying a nice mug of tea and at least half a packet of digestives! I think that these guys have a lot of promise going forward.

I will certainly be keeping my ear out for them. Old school black metal for the new generation? Why not Idolos are keeping the spirit of black metal alive. 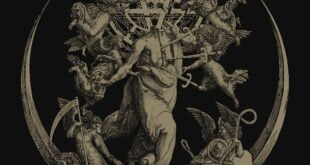