Your music has a definite 80s melodic rock feel to it. Was that something you aimed for or is it something that evolved?

Alina: Michael and Steve, who founded the band, wanted to make music in these direction. It’s pure AOR/Melodic Rock like Fleetwood Mac or Journey.

Michael: Looking back into the history of the band, the band developed from an Indie-/Alternativeband into an AOR-band. Our first effort, “Head Over Heels” was an Alternative-album with a bit of AOR in it. At “Somewhere in America” we’ve turned that combination around, and with “Reflections” we’ve done a pure AOR-album. It wasn’t a planned thing, I guess this is quite natural, you’re getting older, and it isn’t that interesting anymore, to play four chords with a kind of “Fuck You!”-attitude, like we did on tunes like “Changed” or “Leave” on our first album. Now we’ve dressed this “Fuck-You!”-attitude into a well produced, keyboard-oriented arrangement *laughing*.

Since the relase of “Somewhere in America” you’ve had a change of singer. Can you tell us about your new singer?

Michael: Alina is a great and energetic singer, she sent a tape, and I thought in the first place: “This isn’t that bad”. Steve and I auditioned some interesting singers… we rehearsed with a RnB-singer, great voice, but it didn’t worked. We had an actor, who starred at an ABC-series in American TV and also do singing, who is great as a person, but it didn’t clicked musically. I was kind of frustrated and went into a Karaoke bar, to audition singers, but all of them were really bad. So I went home – it was 1:00 am in the morning – and went through Alina’s tape a second time, and listened to the other songs on it. It sounded fantastic, and the next day I called Steve and told him: “That’s the singer”. I dropped her an E-mail, started with the words “I want to cut a long story short: we want you in the band”, and so it finally happened. Very bread and butter.

Your new album, Reflections came out in 2016 and has plenty of great reviews. Can you tell us a bit about the album and the songs on it?

Alina: The album was produced in the Vespa Studios in Toronto, Canada with Harry Hess. The recording process lasted 5 months and it was pretty exhausting but also incredibly fascinating as I had never recorded an album professionally before. There has already been some talking about Harry producing “Somewhere in America” (our last album) but due to time problems it was not possible to collaborate on that album. So now we are more than happy that it finally happened. He is a very kind and hard working person and he tried to give “Reflections” a personal note. It was a pleasure to work with such an amazing and experienced producer and musician.

Michael: My personal goal was, to top “Somewhere in America”, and I guess, we’ve reached that goal. We’ve matured as persons and also as musicians since, and I guess you can hear that in the music. Of course, we’re always try out things on our albums, also on “Reflections”: for example, “Whatever” is an orchestra-piano-ladden ballad, which could be played in every Lovesong-show on BBC Radio 2, same with “Sooner Or Later”, which has some Sixties-influence. It was fun, but also because of Harry’s production, the spectrum of the whole album became a bit more focused, and I mean that in an absolutely positive way.

Where did you get the inspiration from for your lyrics on this album?

Alina: The album is called “Reflections” and that`s what it`s all about. We try to write what we feel, what we`ve experienced so we get the inspiration from our daily life, our experiences and emotions. Most of it deals with love and heartbreak but we also wrote about partying like “Last Night” or family like “Brother”.

Michael: For me it’s always important, to give the lyrics a “universal” message, so in case someone hear it, he (or she) could say: yes – that’s me, this song is about me.  Of course I wrote everything out of my personal point of view, but on “Reflections” the lyrics were more important than on the previous releases: Alina and my relationship with our partners ended up in an unfair and very hurtful way pretty much the same time, and we also had more or less the same experiences. So it was kinda natural, that we wrote about those things. And this is what “Reflections” is about: looking back, express your feelings and experiences. The whole album is a story: “Nothing To Lose” is a pretty sarcastic introduction, and then the whole story started: Party, fun and dancing at “Last Night”, the emotional crisis at “Heart On Fire”, “Whatever” and “True Confessions” are pretty much two sides of the same medal, one time out of Alina’s, one time out of my sight. “Northern Light” is about leaving the past behind, “Brother”, “Sooner Or Later” and “Believe in Me” are pretty much positive efforts to concentrate on the people in life, who are standing behind you – always and without any questions. “Once” is the perfect last song for the album: “You once were a friend of mine”. No more word to say. I wanted to create something like “Dust in the Wind” from Kansas, a masterpiece, that has the most profound and emotional meaning with as less lyrics as possible.

Who writes the songs in Cornerstone – is it a group process or are there one or two main songwriters?

Alina:The songs are mainly written by Michael (bass) and Steve (guitar). Michael is very good at writing lyrics and Steve at finding the perfect guitar parts. There is just one song called “Whatever” which is written by Michael and me. As soon as the two wrote a new song, they showed it to us and we tried to add our personal touch to the song as well.

You’ve described your music as “unhip, uncool and un-sexy”. It’s probably not a fashionable style of music at the moment, but is that an advantage or disadvantage in terms of booking shows and promoting the band?

Michael: *laughing* I’m afraid, this was my intention. We were part of a German Rock-Magazine, and all of the bands inside were looking identical… you could have take the picture from the band of page 3 and change it with the pic of the band from page 17, and it wouldn’t made any difference. We were inside and we looked differently, and this was very cool in my opinion. Journey were also pretty “unhip and uncool” in there Heydays, so I thought, everyone will wondering, why a band will tag themselves as “uncool, unhip and un-sexy”, and will immediately check out the band. Target reached *laughing*

You’ve got some tour dates later this year in Austria and Germany. Are there any plans for more tour dates?

Michael: yes, we’ll do more dates later this year, of course. 2016 was a nightmare, workingwise, and all of us need a rest to care about our private lifes, families, friends, etc. From April on we’re starting playing gigs again, and slowly starting to write new tunes, but no stress: for the moment we have enough about studios, recordings and so on, but I guess the hunger will appear again *laughing*.

If you could tour supporting one band, who would be your ideal choice to tour with?

Alina: It would be a honor to tour with Brian Adams, Fleetwood Mac or Journey as they are our role models and we would love to learn from there live performances.

Which are your favourite countries to tour, and why?

Alina: England, definitely! We love to play there, the people really support our music and it makes such a difference to play in England than for example Austria. In England, the audience is truly listening to the music and they provide us with good feedback after the show. We can`t wait to get on tour in England again!

In 2013 you did a charity single, covering Bronski Beat’s “Smalltown boy”, Why choose that song/artist to cover?

Michael: We knew this guy who had cystic fibrosis. It’s a horrible disease and we saw him in Nottingham City Hospital. We thought we could do something to help, the goal was, to get the song into the UK-charts and make some money for charity: let’s do a cover of something no-one would expect. The UK likes dance music a lot. We thought about Erasure in the first place, but no-one felt really comfortable with that, so we did “Smalltown Boy”, because it’s pretty cool. Ironically, it didn’t chart in the UK but it entered the charts in Austria. But the whole thing wasn’t a great idea. It wasn’t Cornerstone music, Patricia –our former singer -and I created it for charity – a good charity – but I’m not proud of it musically. We’re a rock band. Looking back, I wouldn’t do it again, to be honest *laughing*

I spend half my life at gigs or festivals and the other half writing the reviews and editing photos, and somehow find time for a full time job too. Who needs sleep - I've got coffee.
Previous Krokus – Big Rocks
Next Beyond the Black interview. January 2017 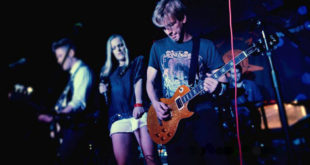