Arkham Witch – Legions of The Deep

Arkham Witch are a Britis

h band formed in 2008 and features members of The Lamp Of Thoth. They describe themselves as “Old School Heavy Metal/Doom infused with Lovecraftian horror, tales of mighty Barbarians and festering evil superstitions!” an intriguing introduction.

This is their second album and kicks off with “David Lund” which has a riff reminiscent of the classic “Holy Diver”. It is a lengthy track which doesn’t venture far from its base riff and incorporates Hammond organ.  From the opening track the songs have an instant familiarity about them, borrowing heavily from the legends of a bygone age but stamping their own brand onto it.

“At the Mountains of Madness” sounds like a song that Kiss could have written in around the time of “Hotter than Hell”, mix this with the hints of Pentagram and NWOBHM. The album’s appeal is in its retro sound, primitive riffing, occult leanings, quirky vocals and healthy helping of humour; which perhaps detracts from the overall concept slightly. The album closer “We’re from Keighley” sets out their stall that they don’t care what you think and cross them at your peril. They really sound like no one else as a whole apart from their predecessors The Lamp of Thoth.

My only real criticism would be the drumming, it is a solid backbone but a bit more flare would not go a miss especially on the longer tracks. Production wise it has a classic sound akin to the likes of late 70’s Priest and UFO. Generally a good album but will have limited shelf life.

Old enough to know better. I have been a metalhead for a long time, I am a lifelong collector of vinyl and cds, the more the better.
Previous FROM THE BOGS OF AUGHISKA – Roots Of This Earth Within My Blood.
Next METAL FEMALE VOICES FEST – Interview with co-founder Val. 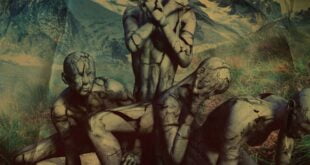