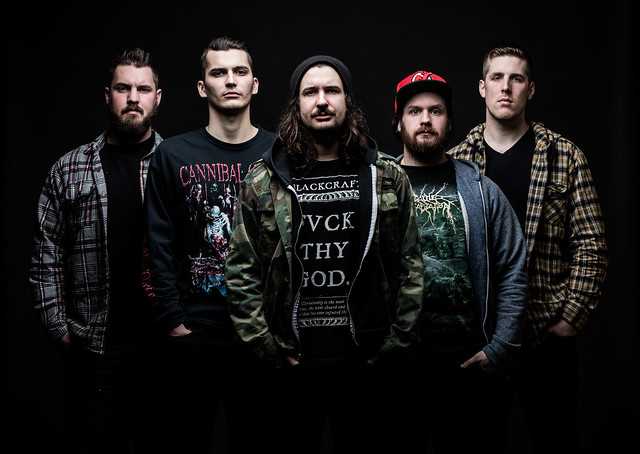 Vancouver is known for various sightings from the famous Ogopogo to the fabled Sasquatch, the untamable metal force that is THE MOUNTAIN MAN are debuting their title track from their 2016 EP ‘Bloodlust’ on YELL! Magazine. Their EP is slated for release Friday, March 25. The entire album was purposefully written to leave the true interpretation to the listener. The title track is one of the more obvious songs written to be an aggressive, frenzied single entirely written with hatred. The album is available for pre-order here: Bandcamp (https://mountainmanmetal.bandcamp.com/)

Vocalist Parker comments on the track:

“We’re real excited for this record, it’s been months and we finally get to unleash the beast. We’re confident that there will be a song on here for everyone.”

Vancouver’s rugged outdoors-metallers, The Mountain Man, deliver a diverse blend of hard-hitting music, paying homage to the Sasquatch through crushing riffs and blaring drums. This band is all Canadian; celebrating camping, plaid, beer, and above all else energetic metal. Parker (ex-BRAUHEIST) gets straight to the point with his raw, gruff vocals and lyrics filled with animosity that cut through the instruments like an unyielding axe. Each song is like a hand-drawn map guiding fans through the British Columbian wilderness. While the first half is complete, the second half is up to the listener to build their own path and take what they will from each track.

The band developed their sound from listening to groups like The Black Dahlia Murder, Crowbar, Gojira, Lamb of God, and Black Sabbath, taking to heart the importance of dedicating their lives to their craft. Tevyn Pacey (Bass), Ryan McCreedy (Drums), Parker (Vocals), Tyson Tambellini (Rhythm Guitar), and Jordan Orr (Lead Guitar) are like woodsmen secluded from civilization with nothing but their instruments to craft doomy, yet frantic metal. They harness a variety of metal genres and bend them to their will.

The Mountain Man are releasing their debut EP Bloodlust on Friday, March 25, 2016. The five song EP is purposefully open ended so that listeners can interpret each song and find meaning for themselves. More information can be found at https://mountainmanmetal.bandcamp.com

General Manager and 'THE' competition guy at planetmosh.com. Manager of The Goddanm Electric www.thegde.co.uk, Tour manager for Serpentine, and ex-general Dogsbody at Hammerfest.co.uk. Media partner to numerous bands. Also takes photos, writes reviews and likes classic rock, with a touch of thrash to get the blood flowing.
@https://twitter.com/shakeapawUK
Previous Date Changes For Hiraeth Tour With Lost In Despair
Next The Virginmarys reveal all album details + brand new sons ‘Motherless land’