The Burning Crows – ‘Never Had It So Good’

The Burning Crows plough a rich vein of good-time, old-fashioned sleazy, snarling rock ‘n’f’n’ roll that traces its roots back to the likes of Mott The Hoople, Slade and Bad Company and, more especially, latterday reprobates such as Dogs d’Amour, The Quireboys and The Wildhearts.

Indeed, mention of the quintessential doyens of the latterday sleaze rock scene, the Quireboys, is more than apt – as this east coast quartet are managed by Matt Goom, and Keith Weir makes a guest appearance on ‘Time’.

For all the heritage to which they can lay claim, however, the Burning Crows stamp their own identity on these stonking five slices of unadulterated, unashamed party rock, filled with massive melodies, hugely hummable riffs and stomping dancehall bravado.

‘Slow Up, Get Down’ is the obvious choice for the lead single, as it saunters onto your stereo with a confident swagger, wiggles its hips provocatively, casts a knowing, lecherous wink over its shoulder, tousles its hair, sneers and yells “let’s start this muthaf***ing party right here, right now”. Whippz’ vocals are irrepressibly, irresistibly inviting, while Lance Daniels’ guitar snaps and snarls as it delivers the song’s infectious groove. ‘You, Me, Tonight’ immediately wins points in this corner by resurrecting the cowbell: the tune is very much in Cinderella territory, and is another infuriatingly, insanely sleazeball anthem.

‘Time’ slows things down, just slightly, with its dirtbox bluesiness, with Keith Weir’s piano perfectly complementing the emotion of the song’s delivery, while ‘Going Down’ is another stomping traditional rock anthem, with the kind of riff just made for future editions of those awful ‘air guitar’ compilation collections, and another hugely memorable chorus. Closer ‘Best Damn Everything’ is the hardest of the five tracks, and my personal favourite, making sure that this debut offering finishes on a high and with a promise of a bright future ahead for this particular mob.

One to file alongside Backyard Babies, Hanoi Rocks and Rival Sons.

‘Never Had It So Good’ is out now and can be downloaded for free from the band’s Facebook page: http://www.facebook.com/theburningcrowsrock/app_2405167945?ref=ts

You can watch the video to ‘Slow Up, Get Down’ at http://www.youtube.com/watch?v=VwpntqS0se4

The Burning Crows tour the UK and Ireland in September, playing:

Full details and further information from the official website: www.theburningcrows.com

Look out for our forthcoming interview with The Burning Crows’ frontman, Whippz. 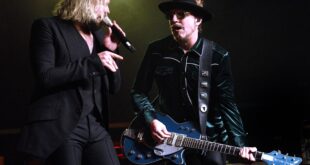 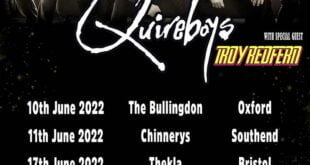 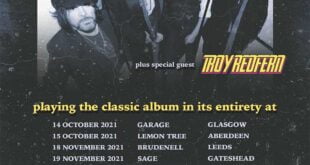 The Quireboys celebrate their “A Bit Of What You Fancy”