Rising metalcorers SUNFALL are back and they have just unleashed an enthralling new single and video, Harakiri, https://youtu.be/xXPUOZahrdY . With this in mind, we spoek to Oli from the band about their background an d more:

The band formed originally from a collection of demos that I had placed together to form an online project. This was to be a change of pace for me since leaving my previous band ‘Bound in Fear’. Now former band drummer, Jacob Loveday had heard of these demos through a mutual friend and then approached me about them. which lead to the idea to take this music to a live setting. This resulted in the formation of Sunfall in early 2018.

This propelled us to playing a huge amount of shows right out of the gate after being picked up by Calibre management.

These experiences created an environment amongst the band that allowed everyone to thrive at what they did. Eventually, Noah See would join the band replacing Jacob on drums however due to commitments to his main band Polar, Ryan wood become the now long-time settled drummer of Sunfall.

We have a huge wealth of musical influences that expands many genres and scenes. This expanse includes prominent metalcore bands such as Architects and Northlane, to deathcore acts such as Fit for and Autopsy and Thy art is murder. Also included are the big bands such as Metallica, Slipknot and System of a down while paying homage to those bands rising into power such as Loathe and Sleep Token. Beyond these bands and genres, we heavily enjoy non heavy music genres such as Hip-hop, Blues, DnB and soo much more.

The band name was a collaboration between band vocalist Sam and myself. Having spent most of his life in Australia, the Sun is heavily symbolic to Sam, it was a sign of freedom, happiness and life. With this, it is the ‘Sun’ in Sunfall that Sam provided. The fall came from my own input. The ‘fall’ is a symbol of the dark that comes with the light. The struggles with mental illnesses such as depression and anxiety. And like many of us know all too well, life is a constant struggle between the good days and the decent into bad days. Ultimately, Sunfall is a band name that represents that fight in ourselves in our pursuit of happiness.

Our history with each other only goes as far back as this band’s inception. We came together through the responses to Facebook posts I put out looking for band members. If I remember right, it was on a Facebook page for students of the university we all attended. This band was the start of our history together.

All of Sunfall’s shows have been within the UK, as of now. This is including both singular appearances and runs of shows. We’ve played with the likes of Monuments, A Martyr defiled, The Royal, Bound In Fear, Distant, A Night in Texas, amongst a wealth of others. We’ve also been ecstatic to share a festival line up with Hacktivist. Our last run of shows was with our good friends in MTXS.

It still amazes us to this day that we were able to share stages these bands so early on.

What makes Sunfall different from all the other bands out there is the bands ability to combine genres in a way and fashion that’s unique to Sunfall. Our take on genre blending has gone to create a sound that many have referred to as original.

Sunfall’s music is a mixing pot of the anger and heaviness of the deathcore scene, the melodic movements of metalcore and post-hardcore; the grooves of nu-metal and tech and cinematic inspired ambience. The band’s sound tells a story, paints images in your head and forces you to really pay attention and feel it’s energy and movements. 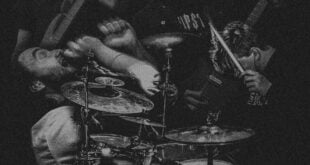