Four piece, London based, metal band Savage Messiah were the opening act on Amon Amarth’s current UK tour. I headed down to the Manchester Academy 2 on a cold Sunday, and luckily found some free parking within a five minute walk. Just made it as I picked up my ticket was making my way upstairs to the Academy 2 when they started, so I must literally have missed their entrance on stage by seconds, then had to weave my way through, what must have been a sold out show, to the photo pit.

As I was in the photo pit for first few songs, this review isn’t as detailed as some of my others and when I came out the pit it was into a packed out and dark venue. I could barely see to make notes so apologies for the brevity but here goes. They opened with Iconocaust and whilst I missed their entrance onto the stage my ears were promptly assaulted by all breaking loose on that stage, loud, fast and brutal but not in a bad way. In exactly the badass way you would expect from a young metal band. As I threaded my way through the crowd I could see a few fists pumping. Cross of Babylon came next more of the same, super-fast drums and riffs reminiscent of Iron Maiden’s Run to the Hills with a bit of synchronised head-banging from Joff and Mira.

Then came Hellblazer reminding me of local lads Absolva. Dave asked if the crowd were feeling alright which was answered by a loud roar and he went on to say that rumour told him Manchester loved thrash metal and asked if we’d checked out their latest album ‘The Fateful Dark’ because, if not, we could should check it and our five star review here would agree with that! Another fast one in Scavengers of Mercy came next with some piercing screams of ‘scavengers’. The title track The Fateful Dark came next, in fact all six songs from tonight’s set list are on that album. Dave advised us that the band have always had a special relationship with Manchester, having  played here with Evile in 2011. The last song Minority of One yet another fast song, with bullet drumming had the audience which was mainly male, raising their horns and shaking their heads so hair was flying both on and off stage. At the end Dave said ‘Thank you my friends have a great night we are Savage Messiah. See you all soon if that’s Ok? Thank you and enjoy your concert’ they received a well deserved round of applause as they had certainly got the crowd warmed up ready for the next two bands. They managed to pull in most of the crowd, for what must have been a sell out, or nearly sold out, show and that isn’t usually the case for the opening act so the London (based) boys did well!

After a short break and change of back drop from Savage Messiah to Huntress,  it was time for Californian Heavy Metal band Huntress to take to the stage. Fronted by the stunningly attractive Jill Janus, who like Kobra Paige from Kobra and the Lotus, is a classically trained opera singer giving her a powerful vocal range. The band is supposed to be a five piece but only one guitarist, rather than two, was on stage tonight, Blake Meahl, and I don’t know why Eli Santana wasn’t playing. The guys took to the stage and started playing a spooky introduction then the mighty Huntress herself, Jill Janus flew onto the stage dressed all in black, with a bat like leather cape and Huntress opened their forty-five minute set with Spell Eater. A well positioned fan was blowing or fanning Jill’s long blonde hair around her lovely face so she was a sight to behold. Tall, leggy, slim and blonde but her looks belie a powerful voice which suits the genre. The ends of her fingers were painted black and her fingernails shaped like talons to give the appearance of a huntress ready to pounce on any unsuspecting prey, and no doubt many a man in the audience wished he were the hunted! (In his dreams!)

After a couple of songs Jill removed the cape to reveal a hood which she wore for a couple of songs. The set list included tracks from 2012 release ‘Spell Eater’and the latest album released in 2013 ‘Starbound Beast’ plus a new track Harsh Times on Planet Stoked. Jill asked everyone to put their paws together and thanked everyone and asked ‘Let’s hear it for Savage Messiah, who got a hearty round of applause and shouts. With only a couple of songs left she said she had asked their good friend Lemmy Kilmister to help write a song and the song he wrote was I want to fuck you to death. A love song? It includes the lyrics ‘I want to suck your blood, I want to fuck you to death’ so for a vampire maybe it is, indeed a love song! After this we came to the last song and Jill got everyone clapping ‘Come on everyone! Prove to Amon Amarth that you’re ready’  ‘Are your pussies wet?’ then ‘It’s time to let the witches in’ was the screamed introduction to the last song Eight of Swords with some ear piercing screams. The audience held up their rock horns and Jill’s final words were ‘Thank you Manchester! Stay High’

Two fantastic opening acts left the packed out venue well and truly warmed up but alas I wasn’t able to stay for Amon Amarth. due to work commitments the following day, which is a shame as my colleague Dennis Jarman says of the previous evening’s gig “Amon Amarth at the Sugarmill in Stoke delivered a 15 song set of blistering technical death metal from opener ‘Father Of The Wolf’ to the crushing closing ‘The Pursuit Of Vikings!. Even though the venue holds only a couple of hundred, the sold out gig housed an audience who at times surprised the band with their vocal participation throughout the night.” PlanetMosh’s Anthony May will be attending Leamingto Spa tonight so watch this space for a full review of Amon Amarth!

I first went to a gig in 1981, Gillan at Leeds University. I've been a regular gig goer ever since. I haven't kept count of how many gigs I've been to over the intervening years, but it's a lot! My favourite bands are AC/DC then, in no particular order, Anti-Nowhere League, Slaughter and the Dogs, Towers of London and Dirt Box Disco. I tend to like Glam/Punk and rude offensive lyrics, not sure what that says about me but as Animal would say 'So What!' The question was recently put to me - did I write for any online publications? My reply - No, but I'd like to! Planetmosh was suggested and I found myself offering to review Aces High Festival. Easy peasy I thought! Well not quite, if a jobs worth doing it's worth doing well! I had sixteen bands to research. I found I actually enjoyed that and it kept me too busy to be making lunatic comments on Facebook! ;) Then I felt a bit inadequately qualified. I mean, who am I to comment on others, when my musical expertise extends to being able to play a mean Greensleeves on the recorder and a passable Annie's song on the flute! Haven't picked up either instrument for years! What I do have, however, is over 30 years of experience as a gig goer, so I can comment on what I like and what I don't! It's only my opinion and, if I don't like a band it doesn't mean they are bad, just not to my own liking. I admire anyone who has the guts to get up on that stage and have a go!
@2296928222
Previous CARE OF NIGHT – CONNECTED cd
Next The Hyena Kill – Still Sick/Blisters 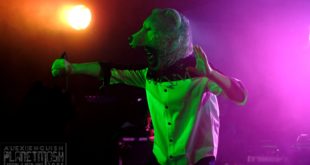