Ministry From Beer To Eternity (AFM)

Once upon a time Ministry were the leaders in their field with imitators a long way behind. With a career that spanned 25 years + until they decided to call it a day a few years back. They now appear to be hellbent on tarnishing that solid gold reputation with what is little more than a series of rehashes. Al Jourgensen has the respect of many of his peers and is well revered, it is well documented about the working relationships between him and Paul Barker over the years and it became apparent after their parting of ways the two entities need each other to complete the picture that Ministry so vividly painted over the years. From looking at the title of this album it sets off on the wrong foot with the tongue in cheek/jokey title, it was always going to be hard to recover from it. Al is obviously still pissed at the world and its injustices, but this album feels forced and treads water which has been the case for the last few records. The opening track “Hail to his Majesty” more or less sets out the ideas of whole album, samples with the signature Ministry guitar sound and pounding rhythms which all becomes tiresome very quickly. “Punch in the Face” is the kind of nonsense I expect from the new wave of fancy fringe bands who are pissed off at whatever angst target is in vogue today, not from a genre defining act like Ministry. “Fairly Unbalanced” takes a pop at news channels for not being truthful- new revelation eh? No stone is left unturned in terms of production and it has that devastating Ministry sound but unfortunately the substance in the songs is missing. The album will not be toured but will be promoted in line with Jourgensen’s autobiography which should be a good read. If this is the final hurrah of Ministry it has went out with a whimper instead of the nuclear reaction that they once were. Do yourself a favour and delve into the back catalogue with “The Mind is a Terrible Thing to Taste” or “Psalm 69”. There are glimpses of the power of Ministry on this album and under the circumstances with the death of Mike Scaccia it is understandable that perhaps it is under par but it is not a great finale.

Hail to his Majesty
Punch In The Face
PermaWar
Perfect Storm
Fairly Unbalanced
The Horror
Side FX include Mikey’s Middle Finger (T.V.4)
Lesson Unlearned
Thanx But No Thanx
Change of Luck
Enjoy The Silence

Old enough to know better. I have been a metalhead for a long time, I am a lifelong collector of vinyl and cds, the more the better.
Previous Win a Turisas goodie bag.
Next Pelgrim, An interview with one of The Netherland’s brightest new bands 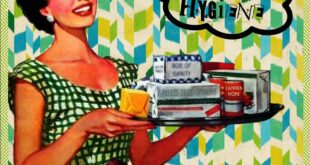