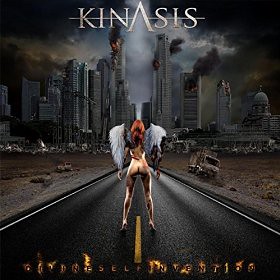 Sometimes a band comes across your path by seemingly the most inconceivable route.  In the case of Kinasis, that path traversed its journey from Somerset to Belfast via Dublin – and more especially one Gareth Jeffs, guitarist with extreme death groovesters Xerosun who, one day out of the blue, contacted your humble PM Ireland editor and asked if we’d be interested in backing a couple of shows in the respective Irish island capitals.  It was one of those moments that you suddenly wonder, just as soon as you have agreed to go down that chosen route, what the absolute fuck have you just done…

Fortunately, in this case, any initial fears proved to be completely unfounded; almost as soon as the subsequently dispatched CD dropped through the letter box at PM’s Belfast outpost, was ripped from its plastic cover and rammed into the death deck, I was immediately convinced I hadn’t been led up the metal path.

‘Divine Self Invention’ is a solid slice of groove-laden industrial edged metallic monstrosity, delivering seven tracks (eight if you count the hidden bonus track on the physical CD) which cut a path somewhere between Lamb Of God, KoRn and Five Finger Death Punch.  Huge, punishing riffs, packed with enough punching power to instantly floor all but the most redoubtable heavyweight champion, combine with massive melodies which immediately immerse you in the dense layers of the tunes.   The twin guitars entwine and writhe around the basic rhythm structures, which in turn possess enough levity to let the talent of their protagonists shine through the intensity of the overall performances.

In a UK scene, in particular, which seems bogged down in its preoccupation with merely mimicking its US counterparts, Kinasis may, at first glance, seem to plough the same furrow.  But, further investigation thankfully reveals that they take their reference points as very much a launching pad and add their own, if not overly fresh, dynamic twist to influences which they wear openly on their sleeves but to which they pay due, respectful homage by creating an interesting, layered album which benefits from repeat listenings to explore its full breadth and depth.

‘Divine Self Invention’ is out now.

Kinasis play two PlanetMosh-sponsored shows (with Xerosun, The Devil Wants Her Swagger Back, ForChristSake, Attack The Day and Minus Ten Thousand Hours) this weekend, as follows:

Saturday October 10 – Belfast, The Bar With No Name