UK Hard Rock foursome HOLLOW STORM are picking up new fans and much praise. With a sound that serves up sharp and dynamic Alt-Rock, the Manchester riff slingers are clearly going places. The guys have just released their debut single and video, Strangers – https://youtu.be/Einim0dG2TU . With all of this in mind, we asked the band to introduce themselves:

We formed in August 2019. Jack, Dylan and Sheldon were jamming as a 3 piece and realised they needed another Guitarist to solidify the sound so asked Jack’s brother Aiden to join on Guitar.

The band started to really gel once Aiden had joined us, prior to this we were just writing and jamming as a 3 piece and once Aiden joined the songs started to sound thicker and fuller.

As a band, we’re all influenced by many different bands, including bands from outside of the genre we play in. We obviously have the main Hard Rock influences from the likes of Alter Bridge and Black Stone Cherry, but we are also heavily influenced by bands like Killswitch Engage.

Earlier in 2020, we had some troubles with our previous band name due to copyright infringements, so we had to change our name. The initials for our original name were HS, so we collectively decided to keep those initials and also Hollow, so we decided on Hollow Storm and it just stuck.

Well considering ¾ of the band are related, the history of the band goes way back haha. Jack and Aiden are brothers and Dylan is their cousin, but we see Sheldon as part of the family now so all of us are related but only 3 of us are biologically haha.

Where have you played or toured?

We feel we are different because we feel like we bring something different to the table and there really isn’t that many bands around, in Manchester especially, that are doing what we do. We’re mixing different genres together and fusing them together to make our own sound. We’re taking heavier influences for riffs and breakdowns and mixing them with much more melodic choruses and vocal styles. Our main vocalist Jack takes on more of a pop style vocal which mixes well with our music because it isn’t the typical vocal style you would expect to hear if you listened to our music. Aiden’s deeper vocal style also compliments Jack’s vocals. 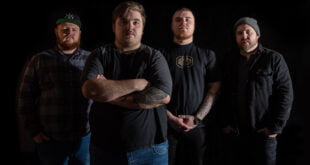