‘Rolling In Town’ is an energy driven surge of Hard Rock nostalgia, combining hard-hitting Blues with Heavy Rock ‘n’ Roll and slide guitar riffs to produce a recognisable sound with a fresh take. If you’re a fan of Classic Rock, you can’t knock this album. 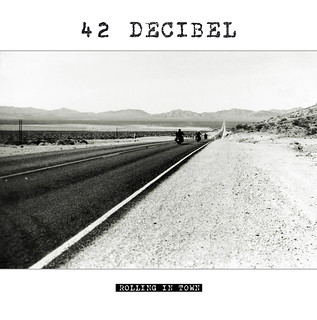 There’s always been a globally shared passion for good old fashioned Rock ‘n’ Roll, but the past decade has seen a surge of geographical diversity hitting the modern Hard Rock genre. Argentinian-based 42 Decibel are one such band who have managed to get their music out there to present to the Rock ‘n’ Roll public.

Most likely thanks to the expansion of the Internet into every ‘Tom, Dick and Harry’s’ daily life, previously unrecognised bands with the right talent and passion have been given an easy and inexpensive way to get their sound out there, all working towards proving wrong the warped critics who try claiming “Rock ‘n’ Roll is dead”.

This is the first I’ve heard of 42 Decibel, and when I began listening, the influences couldn’t be clearer. Their overall playing style alongside the strong gritty vocals of Junior instantly spell out ‘Aussie Rock’ and provide the undeniable sound of pre-1980s AC/DC. Considering the thunderous Brian Johnson era has been reignited by the music of Airbourne, maybe 42 Decibel are the band to fill the void for a sound reminiscent of the Bon Scott era.

Bands like this can be very hit and miss, on one side, there’s the argument that the nostalgic sound represents the bands extensive influence from certain classic rock heroes, and that there’s nothing wrong with expanding on the music we all know and love, and supplying something new yet recognisable. On the other hand, certain individuals would argue that people should discover their own sound and leave the legends where they are – alternatively they may just shout out “BLASPHEMY!” and turn away in fury.

For me, I find it hard to blame bands for heavily integrating their influences into the music they write, especially when previous generations were able to nail such a terrific unchallengeable sound in the first place. I’d like to point out that I’m not trying to make these guys out to be some form of tribute band. The intensity and well matched components of this album lead me to believe this is their real sound, rather than a band trying to grasp at something that’s been there are done that, and in turn, attempting to re-live the Rock ‘n’ Roll lifestyle of their idyllic rock bands.

Further through the album, the tracks enter into a kick of youthful punk, specifically in ‘Rude And Fast’, which begins with a brilliant distorted guitar riff, similar in sound to a faster paced intro of ‘Caroline’ by Status Quo. I think what makes the songs so enjoyable is how laid back they are. They don’t deal with politics or social issues, they’re solely driven by the badass expectations you perpetuate when you think of an old school rockstar – sex, drugs and Rock ‘n’ Roll.

‘Eye Of The Hawk’ begins with a volume building riff (a technique which seems to be enjoyed by this band), before pulsing into Junior’s top-notch vocals. This is a song you could see being consider the bands’ Rock Anthem, and just spells out classic ‘to the point’ Rock ‘n’ Roll.

The last three tracks are where I feel the bands everlasting style sits, and could easily be the sound that will ultimately define them. The combination of Hard Rock and heavy blues helps the sound expand into a progressive stage of intensity which is exactly what the album needed to bridge itself from being yet another Rock ‘n’ Roll band.

‘Midnight Teaser (Evil Woman)’ has to be my favourite track on the album – the intense building riff is just so enjoyable to listen to, with a great Bluesy twist in the playing style, it’s a great song to sit alongside Black Sabbath and ELO if you wanted to put yourself together a playlist about ladies of deception (your reasons are your own business). ‘Smooth Talker’ then brings the album to a close with a cool, chilled our Blues swing, reminiscent of The Doors, which rounds everything off perfectly, and puts you back in the position to return to the first track, ready to re-live the fuelled Hard Rock sound again.

I can’t deny that if this were an AC/DC album, mysteriously lost in the archives (as we are often lead to believe by record companies) I’d be calling it a hidden gem. For me, that’s enough to deem ‘Rolling In Town’ a great album.

Overall, ‘Rolling In Town’ is an energy driven surge of Hard Rock nostalgia, combining hard-hitting Blues with Heavy Rock ‘n’ Roll and slide guitar riffs to produce a recognisable sound with a fresh take. If you’re a fan of Classic Rock, you can’t knock this album.

‘Rolling In Town’ is an energy driven surge of Hard Rock nostalgia, combining hard-hitting Blues with Heavy Rock ‘n’ Roll and slide guitar riffs to produce a recognisable sound with a fresh take. If you’re a fan of Classic Rock, you can’t knock this album.
Share

Regular gig-goer, with a passion for Rock, Blues, Country and Metal.
Previous Rival Sons Kick Off European Tour with Deep Purple This Sunday
Next Doll Skin Release Debut EP ‘In Your Face’