Saturday! The second day of Wildfire and the sun has put his hat on, as the old song once said. At the unholy hour of 11am, first band on the main stage were Leeds based The Idol Dead who were the perfect opener for the change of weather with their energetic, hook laden songs containing killer harmonies. Opener ‘Summer That Never Was’, with its Blink 182 power punk vibe  was heard from our open cabin door but we got down for the rest of the set. The marquee was near full considering the early hour, and those who were still sleeping off Friday’s alcohol, missed one of the most energetic sets of the weekend with frontman Polly throwing himself around like a much younger Iggy Pop.

Highlights were the fuzzed up chords of ‘Travelling Man’ and set closer ‘I.D.O.L’ with Polly ending the song flat on his back. A rare chance to get to the second stage saw me catch Glasgow band Scarlets. They were a last minute addition to the bill and their alternative, folk tinged rock complimented the suns rays to. Opener ‘After All These Times’ was Buzzcocks like power pop delivered by the hyperactive vocals of Dougie Macsween. Their set was uplifting, bolstered by the fiddle playing of Emily Nenniger and flew by too quickly. Another song that stood out was the Pretenders like suss of ‘This Alchemy’.

Things were about to get heavier now as London based quartet Death Valley Knights stepped up and forty minutes of ballsy metal was on offer. Lead vocalist/guitarist Jake Thorsen only needed a hammer to complete his likeness to Thor, an imposing presence to say the least and delivered his vocals through an almost everlasting sneer. Their theme song was a fist in the air proto heavy metal adrenaline rush and the intensity was matched by follower ‘Taste Of The Hill’ as its abrasive Almighty like riffing preceded a guitar solo that seemed to leap out of the speaker stack in front of me. ‘Nothing Left To Steal’, one of four songs played from their current E.P of the same name was a fast footed drum driven headbanger kicked out by Jan Vincent Velazco. Their set ended with the AC/DC boogie of ‘Legacy’

The first of two appearances by guitarist Paddy O’Malley was next as Line Of Fire played their five song set of heavy blues, a stark contrast to the set he would play with Lawnmower Deth a few hours later. Being a fan of Kyuss, their set was one of my highlights of the weekend as the earth moving sludgy grooves of opener ‘What Will You Say Tomorrow?” lead into the slow pound of ‘Purple Sky’ as second guitarist Dave Lamont, lead vocalist/bassist and drummer Ste Dudley locked in tight. The pace quickened with the almost Machine Head ferocity of ‘Lifetime Alone’ as ‘Something Ain’t Right’ brought back the bluesy vibes with a full on boogie finish. Set closer ‘Wrong Side Of The Tracks’ was more Southern rock with crushing choruses.

Some proper old school thrash was up next by Preston based Solitary and having been together for over twenty years, they know what the fans want to hear. No fuss thrash metal, heads down and pummeled out like their lives depended on it. Opener ‘Trigger Point Atrocity’ was a like an aftershock blowing from the stage and with song titles like ‘Predator’, ‘The Diseased Hearts Of Society’ and ‘Humanities Decline’, their anger has not abated over the years. A no show from Re-Animator saw Promethium moved onto the main stage as their vitriolic filled eight song set kept the energy levels high. Highlights were many. Second number ‘Visions’ was an overwhelming wall of sound akin to prime time Ministry. ‘Rain’ hurtled along on bursts of rage and thrash breakdowns. By now you would have thought vocalist Gary McGahon’s lungs would have self imploded but he still kept on roaring whilst making forays to the front barrier, urging the front rows on . ‘Tribute To The Fallen’ was all chest beating riffs and intense breakdowns but my set highlight was the short, sharp bludgeon of ‘Battleaxe’.

The diversity of Wildfire was proven by next band ‘Press To Meco‘. Even though the trio formed five years ago, they all look about twelve and their intense alternative rock brought to mind Quicksand, Will Haven, Far and Hundred Reasons with all three contributing strong vocals. Lead vocalist/guitarist Luke Caley fired up the crowd with quips like “Double cheer at the end of this song or throw your shit at us”. The thrashers were kept happy next with the arrival of Anihilated. Formed in 1981, vocalist Si Cobb is still venting his spleen at the world proven by opener ‘Blood Of The Martyr’. Teeth rattling bass guitar from Si, backing up raging riffs from Danny B and Todd Manning shook any remaining cobwebs remaining from the crowd.

There was no let up as the title track to forthcoming album Anti Social Engineering was a foot to the floor Motorhead piledriver. ‘Somewhere Underneath’ was an S.O.D like charger with Si looking and delivering like Billy Milano. ‘Chase The Dragon’ shifted from a Judas Priest like chugger to a speed metal finish. The frenetic tempos of ‘Scorched Earth Policy’ raced along like ‘Killing Is My Business And Business Is Good’ but the best was saved to the least with closing number, the anthemic ‘We Are Legion’.

Stage clash times meant missing the start of Bigfoot’s set on the second stage but one thing struck me immediately. Since seeing them at SOS Festival in Manchester last year, they have come on in leaps and bounds in their performance even though they played a blinder at SOS. Lead vocalist Antony Ellis  has a much more commanding stage presence and the large crowd responded to Bigfoot’s set accordingly. Highlights were the full on riff laden ‘Come Down My Way’, the huge stadium rock ballad ‘Bitch Killer’ but set closer ‘The Other Side Of Paradise’ has future classic written all over it.

To finish off the second stage heavy metallers I.C.O.N  delivered a powerful no holds barred set. Kicking off with ‘Feeding The Negative’ and also the title track from their fantastic new album ‘The Blacklist’, they leave no doubt that they are here to make sure everyone watching is having a great time. Vocalist Mark Sagar helps encourage the crowd to join in and also move closer. They crowd really gets in to the next two tracks  ‘I’m The Venom’ and ‘Grindin’ Wheel’.

It was great to hear their current single ‘Welcome To My War’ live after listening to it a fair few times, it definitely packs a

punch.  Two more songs from their new album ‘Deconverted’ and ‘Drowning In Their Screams’ go down equally as well. They guys finish tearing up the stage with two songs from their debut album ‘New Born Lie‘ the title track and ‘Seven Second Warning’ again these goes down superb with the remaining crowd that has stayed through out their stunning set.

The only downside to their set was towards the end some of the crowd started to drift off to watch Lord Volture on the main stage due to the overlap in stage times however this does not deter the band for a second and they continue to deliver at 110% and the remaining crowd really enjoyed their set.  (Written by Sheila)

Dutch metallers Lord Volture had flown over to entertain us on the main stage and they did with all guns blazing! Lead vocalist David Marcelis’ natural charm had the crowd in the palm of his hand from the off with his stage mannerisms and high pitched vocals. If the beer glasses had been glass and not plastic, he could probably have shattered them. Their seven song set list kicked off with ‘Where The Enemy Sleep’ from latest studio album Will To Power, highlighting the tightness of the band made up of David’s brother Paul on guitar, Leon Hermans on guitar, Simon Guerts on bass guitar and Frank Wintermans on the drums.

The lengthy instrumental intro to ‘Taiga’ was a good scene setter for the vocal tour de force to follow. Other choice cuts were the hard rock of ‘The Pugilist’, its main riff sounding like ‘Rock City’ by Krokus. The thunder of  ‘Will To Power’ was dedicated to Dave Ritchie and crew as the set came to a close all too soon with the drum driven power metal of ‘Line Em Up’ and the emotional bombast of ‘Hearts Of Steel’.

NWOBHM survivors Salem, another main draw for me, did not disappoint and took the crowd by the scruff of the neck with opener ‘When Love’s In Your Heart’ coming over like Def Leppard era High And Dry. There was a fine tinge of melody in Salem’s set, proven by the Thin Lizzy licks from guitarists Mark Allison and Paul Macnamara coursing through next number ‘High Stakes’. ‘Rock Fever’ was epic in the vein of the Who at their heaviest with lead vocalist Simon Saxby looking a bit like Tommy era Roger Daltrey. Wishbone Ash like dynamics kept the air guitarists happy during ‘The Keeper’ and my set highlight ‘The Answer’ was prime hard rock, just pipping closing Uriah Heep like ‘Forgotten Dreams’ to the post.

Festival favourites Lawnmower Deth can have you laughing like a drain one minute and moshing like a loon the next one. The music business is a fickle machine and while bands like Lawnmower Deth get ignored, other Tom, Dick or erm, Five Finger Death Punch bands get the six page spreads! They enter the Wildfire main stage to the backing music of The Muppet Show and hurtle straight into a thrashtastic ‘Spook Perv Happenings In The Snooker Hall’ with its refrain of “Ray Reardon, Ray Reardon, we are all doomed”. Vocalist Pete Lee aka Qualcast Mutilator was his usual wise cracking self, signalling out Holocaust front man John Mortimer who was sitting outside for looking like Biff Byford from Saxon.

Short songs flew by so fast it was hard to keep up with them but I scrawled down a hilarious ‘Flying Killer Cobs’ followed by ‘Drink To Be Sick’ and ‘Betty Ford’s Clinic’. A sort of death metal delivery of ‘Sumo Rabbit’ was followed by a funny intro to ‘Ooh Crikey’. Drummer Chris Flint did a parody of Man0war’s ‘Black Arrows’ by saying “Let each drum I now play be a black arrow of death to those who play false metal, and Line Of Fire”. Line Of Fire being guitarist Paddy O’Malley’s other band aside from Lawnmower Deth. A punked up ‘Icky Ficky’ was followed by ‘Urban Surfer’ containing a wedding proposal in the crowd. She said yes!

I managed to write down the moshing caused by ‘Did You Spill My Pint?’ and ‘Satan’s Trampoline’.Stage time limits meant that we never got the planned cover of ‘We”ll Bring The House Down’ by Slade so the only encore they had time for was a couple of seconds long song called ‘Fuck Off’, very fitting end to a fun set. Headliners Ten were left with a tough act to follow and even though their heavy slice of pomp metal was professionally delivered, they did not quite do it for me. The three guitarists made played off each other perfectly but most of the fourteen songs seemed to blend into each other but mid set number ‘Apparition’ stood out, reminding me of early Magnum. The band got a rapturous reception throughout and their top of the bill placing was well deserved . 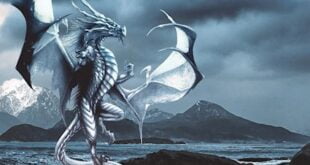 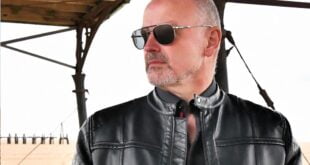