Tonight the bar is set high at the Brudenell social club in Leeds this Thursday, 5th May 2022. Not because there’s any competition but the calibre of musicians is smoking hot!

Dubbed the King of slide guitar, Troy Redfern is a distinguished instrumentalist, songwriter and vocalist.

Riding solo without his backing band this evening. Troy makes his shadowy entrance onto the stage. Dressed all in black this cosmic cowboy was armed with his trusty resonator guitar. The ‘wah wah’ effects and vibrato bring a killer sting on the devilish Scorpio from his latest album The Fire Cosmic, a great opening song to captivate the crowd with.

Delving straight into John the Revelator. Troy’s husky blues vocals, paired with his swirly tremolo style, (think big telecasters) and whammy effects without the bar; show you why Redfern has gotten his nickname.

Redfern plays with such ferocity, the power of his playing is something else to see. You can feel the passion he has for his music as he makes work of his signature Diamond bottle neck slide on the lusty Waiting For Your Love.

Introducing his trusty ‘1929’ National Triolian resonator guitar. Tory tells us it’s his favourite guitar, ”a robust battle tank that has been everywhere with him”. It’s a lot more robust than his slide, as playing with such strength causes it to bust, good job the National is made of stern stuff!

Luckily, there’s another slide to hand on his mike stand. You could say he was blessed as no damage was done to his hand as he plays Sancitify My Soul.

If you’ve not seen Troy Redfern before or even heard of him. You should definitely go check him out. Covering Jimi Hendrix’s ‘Voodoo Chile’ to close, he thanks his audience tonight and says you might know this one!

Made up of husband and wife duo, Aaron and Grace Bond are When Rivers Meet. They have brought along touring musicians Roger Inniss on bass and James ‘Foxy’ Fox on Drums and Keyboards on their ‘The Flying Free Tour’.

Saving Grace is the latest album from the dynamic duo released in 2021. Prior to that, We Fly Free was their 2020 album. Having waited over two years to see them, I am not disappointed as When Rivers Meet delivers a blistering 18 song set.

There are a plethora of instruments adorning the stage from violin, and mandolin to guitars. Opening with the ardent Did I Break The Law. It’s clear from the off that this pairing is something else! Not your traditional blues artists, they are more contemporary in style, playing to their own vibe.

During the first lockdown, the writing partnership bonded even more as Grace explains My Babe Says That He Loves Me was the first song they wrote for Saving Grace. ‘Along with a load of baggers,’ a gleeful Grace says ‘we need to slow down the pace’ as they ease into Don’t Tell Me Goodbye.

There’s a lot of positive emotion between the two performers, with Grace taking the lead and Aaron joining in the harmonic verses. Their performance could be a theatre show, as their audience is quiet, and even the bar yobs are behaving themselves and being respectful of the band. Until the end, the silence is broken with rapturous applause.

Going back to the first EP ‘Innocence Of Youth’ Who Wants to Be A Free Man is more old school blues rock n roll. Grace’s vocal adapts with ease from the style of music they play and boy does she has a set of lungs, holding those power notes with perfect ease.

Telling tales of how they met in a pub Aaron used to frequent and Grace worked in some years ago. I’m loving hearing ‘their love’ story and how their musical journey began. Lost and Found is a nod to those times, bold and thunderous.

”Give the band a boot” haha, ”because you know they cost a fortune but don’t tell them that ” Grace jovially says as Roger and Foxy exit the stage for their next song.

The duo are now alone on stage and facing each other, having removed their ‘in-ears’ to hear each other better. Grace tries to start the ‘whistling’ intro to Bury My Body but needs a little help with Aaron and the audience helping out. The melodic intro gives you goose bumps. The song itself could be imagined on the credits or a soundtrack to a film. It’s one of the best live songs I have heard. You can sense even more emotion between Aaron and Grace. It’s oscar worthy and the crowd agrees. I have never seen so much love for a band, with double the applause at the end.

James Fox, drummer now takes to the keys, as Grace takes a solo lead on Tomorrow at the start of the next song whilst Aaron composes himself after the emotional last song and joins Grace with his cigar box guitar.

A big drum sound is a base for We Fly Free. As Grace goes out into the crowds for a ‘song-out’ as husband Aaron stands bemused playing his guitar asking ‘where is she?’ We are treated to a bass solo from Inniss, as Grace returns and watches from the stage side. Not only do we get a bass solo but Foxy gives his skins a good pounding too. Keeping the fast pace On He’ll Drive You Crazy, their latest single/video release.

Giving big thanks to their crew, manager, and everyone else who has made it possible for this tour and their music to happen. Want Your Love is the closer of this epic set.

Some bands play the same set and you get the same scripted stories. Depending on the band you can either see them once and be happy with that. But others like When Rivers Meet, captivate you. A bit like watching your favourite film over and over – you want more.

Returning to the stage for two more songs. Grace says ‘we’ve never had a foot stomp!’ and asks ‘can we have a foot stomp?’ The audience duly obliges and stomps their feet! Yeah!

Encoring with Never Coming Home and Testify makes for a terrific end to a magnificent set!

Words and photos by Alex English

TICKETS ARE AVAILABLE FROM: 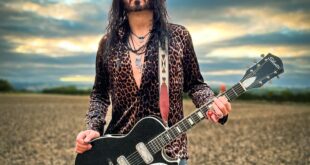 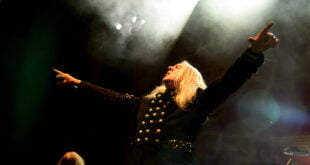