Brit bruisers TRENDKILL have just dropped their new video and single, Obsession – https://youtu.be/TP0GeUMsrSY . With that in mind, we decided to find out more about the band…..

The full band line-up is:

The band formed roughly 2014, these were the early days of playing covers around the local town while we were in school. It formed quite randomly really, Corey and Jonny decided to start a band, when Isaac joined, he didn’t even know what a bass was, we showed him Cliff Burton and the rest is history.

We come from an interesting little place, Corey, Jonny and Isaac are from a little industrial fishing village in the North East called Redcar, it was hit quite hard when the steel works shut down and it became the place with the highest unemployment in the UK. It was rough! Drugs and crime wasn’t something out of the ordinary there, we all saw our fair share of stuff over the years, either good or bad.. Mostly bad. No one really had any money for anything, everyone was skint or on the dole and you had to have thick skin to live there. It was a place where you got a trade, went to work, had kids and died. To everyone when we said we wanted to be musicians, this was alien.

We discovered Alistair in 2020, he’s about an hour up the road in Newcastle which works well!

I’d have to say the band started gelling when we all went to college together. We worked quite hard with our first vocalist Elliot for a few releases, after his departure we had this weird Geordie lad following us round for ages, we asked him what the crack was and now he’s in the band.

We have influences from everywhere, started off as the Big 4, after that we always listened to different bands, experimenting with different music. Gojira, Cacophony, Pantera, Morbid Angel, Guns N roses! The list goes on. When Ali joined, he brought a whole new world of influences to the band which has taken us to a whole new level.

The history of the band goes quite far back, Corey and Jonny have been friends since they can remember- coming on about 20 years. Isaac met Jonny during secondary school, and we wish we found Alistair sooner.

Are you friends from school or any family relations?

Corey, Jonny and Isaac all knew each other from school days so quite a while!

TrendKill is different because it’s a blend of everything that’s great about metal, we don’t confine ourselves to one genre.. Ish! We all like a bit of everything and i think it reflects through our music. When we’re writing songs, we have the riffs then we skim the fat so only the best stay. We’re not

We’d have to say its aggressive, but yet melodic, every riff is a different spin on the previous riff bringing constant Surprises to the music, making it something interesting but definitely something to headbang to!

All of our social media is available through our LinkTree! 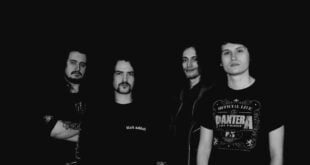 TRENDKILL ARE BACK WITH A STUNNING TRACK!