The second morning of the inaugural Rockingham fest dawns overcast and mizzly, but that doesn’t darken or dampen the spirits of the early risers making their way from all directions for the slightly earlier start to Saturday’s proceedings (well, we have gone from six to seven acts performing over the course of the day). 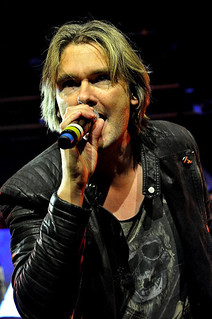 The second Swedish band to appear over the weekend, Care Of Night [7] initially get things off to a slightly more subdued start than their Finnish neighbours the day before, kicking off proceedings with the slower ‘Give Me Strength’ rather than, say, the more uptempo ‘Hearts Belong’.  However, their huge layered vocal harmonies, underpinned by crunching riffs, soon help them to raise the energy levels quicker than an injection of Red Bull and by the time set closer ‘Cassandra’ comes around everyone is well and truly in the mood for what lies ahead.  Vega [8] ramp the testosterone levels up considerably as they take the growing number of early comers on an early afternoon ‘White Knuckle Ride’.  Their high energy performance is characterized by big melodies, engaging guitar harmonies and rapid fire riffs, with sweeping keyboard cascades and memorable, poppy hooks.  Nick Workman (pictured right) delivers a nigh on flawless vocal performance, and commands both the stage and the audience with confident ease, as traditional set closer ‘Hands In The Air’ gets everyone doing just that to give them a deservedly rousing send off. 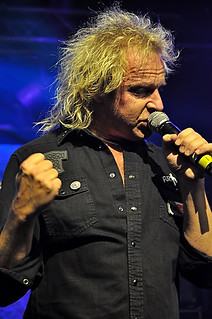 Next up is the traditional European melodic metal produced by Last Autumn’s Dream [7].  With their thick chunky guitars, meaty riffs and hooks, coupled with multi-layered harmonies, they display plenty of bombastic pomp, combined with huge, bouncy choruses.  The collective experience of the band’s constituent members shines through – although why they felt the need to include a pretty wacky cover of Roy Wood’s ‘See My Baby Jive’ is somewhat baffling. By total contrast, Electric Boys [8] – currently celebrating the 25th anniversary of the release of their debut album, ‘Funk-O-Metal Carpet Ride’ – are bouncy and energetic… and that’s only frontman Conny Bloom.  Their  crunchy, blues-tinged funk rock, with its joyous psychedelic groove, is underpinned by deliciously lascivious bass riffs, and the band’s sense of fun and enjoyment transfers eagerly to the crowd, who who bop and stroll along. 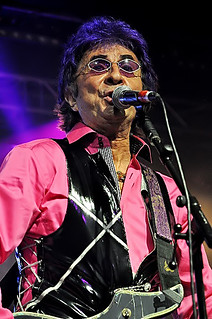 Resplendent in matching black PVC trousers and waistcoat and bright pink shirt, topped off with an unruly twirl of purple-dyed hair, the award for the most flamboyant performer of the weekend, however, most definitely goes to the legendary Mr Jim Peterik [10] – a  man with a songbook thicker than all of the day’s (if not the weekend’s) artistes put together, and an equally voluminous amount of stories to tell!   Taking his band and the audience ‘Rockin’ Into The Night’ (mind you, it’s only just gone 5pm!) with enthusiastic abandon, before proving that his heart is still burning (sic) for the music he created and continues to play with vigour and passion.There is an early tribute to the late Jimi Jamison, who Peterik recalls as “the greatest singer I ever worked with and wrote for”, and he affectionately recalls the audition which led to ‘The Search Is Over’:  keyboardist Alessandro del Vecchio joins Peterik on vocals for a powerful interpretation of the song. His band – who, with the exception of lifelong friend Bob Bergland beside him on bass, are essentially Frontiers Records’ inhouse session musicians – are tight, practised and highly proficient in their handling of Peterik’s extensive back catalogue, which the frontman himself mines with glee, turning the clock right back to 1970 and funk rock vibe of The Ides Of March’s one-hit wonder ‘Vehicle’, before timehopping forward to the post-Survivor era with Pride Of Lions’ ‘Sound Of Home’.  Of course, the shadow of Jamison is never far away, and a second, even more emotional tribute as the set moves into its own second half, with del Vecchio stepping up to the microphone for “Jimi’s favourite song”, the beautiful ‘Man Against The World’.  Survivor’s ‘Is This Love?’ is sandwiched between two of Peterik’s other collaborations – a fiesty ‘Heavy Metal’ and a medley of .38 Specials’ ‘Caught Up In You’ and ‘Hang On Loosely’, during which he lets loose his inner guitar hero, complete with playing-behind-the-head histrionics.  But, of course, he cannot get away without playing THAT song, and just like Robert Tepper the previous day he draws the set to a close with the one song for which he will be forever remembered, even by those outside the rock community who don’t know his name… and so the punchy lead riff of ‘Eye Of The Tiger’ one-twos its way into the audiences hearts once again – although we could perhaps have done without the slightly over-indulgent instrumental middle section.  Otherwise, a masterclass from a master of his craft.

Rockin’ Into The Night / Burning Heart / The Search Is Over / I Can’t Hold Back / Vehicle / Sound Of Home/ High On You / Man Against The World / Heavy Metal / Is This Love? / Caught Up In You / Hold On Loosely / Eye Of The Tiger 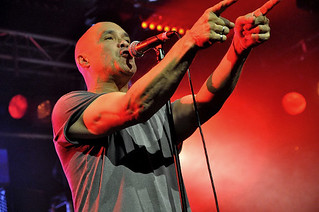 There was possibly only one act on the bill who could have followed that sublime performance, and sure enough that is Dan Reed Network [10].  The funk rock pioneers are making one of their increasingly common live appearances, marking a ‘Revival’ for both themselves and their music.  And they’re obviously enjoying doing so, as it is not long before Reed himself is climbing on the security barriers and conducting the mass choir assembled before him, the initial bead of sweat on his loose grey T-shirt quickly developing into a soaked apron.  Behind him on the stage, the band are having just as much fun:  bassist Melvin Brannon II grooves eloquently, his slaps and runs perfectly counterpointing Dan Pred’s superb funkadelic drum patterns, while Brion James writhes, twists and poses with the ease of a guitarist half his age (he jokes in the green room afterwards that, at 60 years of age, he is the oldest member of the band and “the only one with any hair left!”), while demonstrating his ability to teach those same younger shredders a thing or two, as he wrenches every ounce of passion from his instrument.  As for the set itself, well it is just wall-to-wall DRN classics, from the hypnotic bounce of ‘Under My Skin’ (which has even the security staff at the side of the stage  air guitaring along), through the smooth dreamscape of ‘Rainbow Child’,  the jumping ‘Ritual’ to the growling spit and polished venom of ‘Tiger In A Dress’, which once again proves that Reed and his Network of like-minded and incredibly talented musicians may be separated by many thousands of miles but are most definitely as of one mind and spirit.  Quite possibly the single most inspiring set of the weekend. 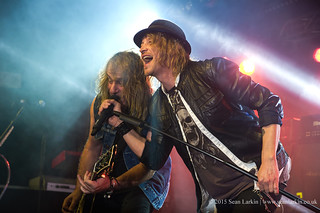 If T-shirt sales in the merchandise area during the day were anything to go by, one of the most anticipated bands of the weekend are tonight’s headliners, Gotthard [8], and certainly the crowd presses as close to the barrier as they can get when the house lights dim and the intro tape roars.  These legions of fans are rewarded with just under 90 minutes of high-end, high-energy haute couture Euro-style melodic metal, which is clean cut, smooth and so well-polished that you can see the sheen in its own reflection.  The Gotthard machine ticks with the precision of a Swiss watch, but nevertheless bumps and grinds with its boots in the dirt, mixing layers of light and shade, high melody and dense harmony with ease and exactitude.  However, though extremely well written, produced and delivered, they just miss that killer edge to their clean well-rounded grooves, although they do provide an enjoyable conclusion to the day’s proceedings.