If you’ve not yet heard of Gama Bomb – where on earth have you been? These feisty Irish lads make geek cool with a sickeningly good injection of thrash.

If you’ve not yet heard of Gama Bomb – where on earth have you been? These feisty Irish lads make geek cool with a sickeningly good injection of thrash. Untouchable Glory is Gama Bomb’s 5th album, and due to be released at the end of the month, on Friday, 30th October.

And boy, have these rules paid off? Gama Bomb bring a new, youthful kick to speed metal, with the power and brutality of many of their long-standing predecessors…only with sillier lyrics.

Ninja Untouchables/Untouchable Glory kick-starts the album, jumping straight in at the deep end, and setting the bar high with it’s speed. Think old-school Annihilator (similar to the sound of W.T.Y.D in the Alice in Hell era), and you’re along the right lines of this sound, an absolutely kick-ass entry to open an album. Avenge Me! follows in quick succession, maintaining the classic sound of good-old 80’s thrash. Drinkers, Inc. comes in third, instantly hitting as a headbanger’s classic with its gang vocals, catchy chorus and chuggy riffs. As My Evil Eye rolls in, this circle-pit inducing track tears into your ear-holes with it’s brute force. Tuck Your T-Shirt In throws a different dynamic: slightly slower to start than its predecessor, the bass really sings here – something that is rarely seen done well in such fast thrash music. Ride The Night marks the mid-point of Untouchable Glory, being the sixth track on the album. This is a feel-good track, making the listener feel as if they really are something. ‘You don’t need anybody, you ride the night! Everyone can see you standing high!’, made me sit back and think “Yeah! I am someone” – so thanks for that, boys!

She Thing brings back the brute and really hits hard with it’s crippingly high pitched vocals. Witching Mania makes me feel all Halloweeny inside on this autumnal evening, talking about witches, the Twilight Zone, mysterious disappearances and witches laughing in flames as they’re burnt to death – good choice on the release date, being the day before Halloween. James Joints is, in true Gama Bomb form – a silly track. Under a minute in length, it is short but sweet and leads nicely into Raging Skies. I Will Haunt You is the penultimate track on this stonker of an album, and yet the Gama Bomb boys still maintain the heavy aggression that made me fall in love with thrash.  After The Fire feels like a good close, and is an aptly named track when considering the fire as the album as a whole. Of course, Gama Bomb don’t let you rest from the speed of their music, but it does feel like a good end to a brilliant album.

I really loved this album, and I think it’s been my favourite review I’ve ever been given. Gama Bomb are such a lot of fun to listen to, and if you like speed/thrash metal and don’t take life too seriously, I would urge you to check this out.

If you’ve not yet heard of Gama Bomb – where on earth have you been? These feisty Irish lads make geek cool with a sickeningly good injection of thrash.
Share

A triple threat, being a photographer, reviewer and interviewer, Miley is PlanetMosh's resident thrash princess - enjoying all things fast and heavy. Fan of the boys with long hair.
Previous Walter Trout – Battle scars
Next The Other – Fear Itself 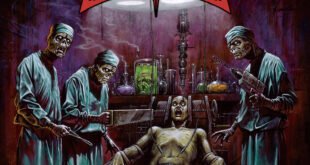 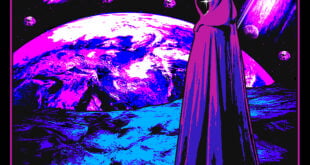 Stitched Up – Jupiter Jazz And The Suicide Cult 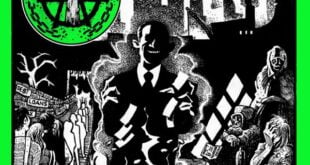