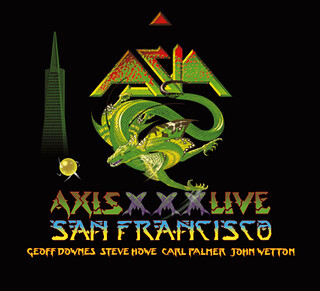 Geoff Downes, Steve Howe, Carl Palmer and John Wetton truly make this a night to remember as the set list features songs from their first two albums and selected cuts from the reunion albums. Asia’s first release was in 1982 and was absolutely massive,  it sat at the number 1 spot in the USA for 9 weeks, powered by the classic rock anthem, “Heat Of The Moment,” and four other radio friendly hits.

Some of these songs are over 30 years old, yet within a modern live setting, they do not sound old, with the sound and production being crisp and clear. There are no real surprises here,  just first class musicians playing first class song’s, we even get a drum solo. The set ends with the two massive hit song’s’ Sole Survivor’ and ‘Heat Of The Moment’.

Cd1 – Introduction; Only Time Will Tell; Wildest Dreams; Face On The Bridge; Time Again; Tomorrow The World; Ride Easy; Pyramidology; The Golden Mean; I Know How You Feel; Don’t Cry; The Smile Has Left Your Eyes.

General Manager and 'THE' competition guy at planetmosh.com. Manager of The Goddanm Electric www.thegde.co.uk, Tour manager for Serpentine, and ex-general Dogsbody at Hammerfest.co.uk. Media partner to numerous bands. Also takes photos, writes reviews and likes classic rock, with a touch of thrash to get the blood flowing.
@https://twitter.com/shakeapawUK
Previous Constant Source of Disappointment (CSOD) – Final Insult
Next Tremonti – Cauterize