Starting out in life as an outlet for three frustrated musicians, Afterlife have now become the full time pursuit for all five members of the band and as a result, this has allowed them to release their debut E.P Alpha.

Formed in early 2011 by twin brothers Steve and Al Reilly (bass and lead guitar respectively) and Iain Stratton (drummer) when work with their previous band dried up.  They recruited Stewart “Raggy” Brown (rhythm guitar) and Pete McCoy (vocals) soon after and began working on what would become this release.

Open track 300 is inspired by the movie of the same name and even has Gerrard Butler’s rousing “This is where we fight…” speech as an introduction.  I can imagine this being the opening track for the band live.  Al’s guitar work is Tremonti –esque and soars over the rhythm and melodies provided by the rest of the band while Pete’s voice cries out with as much authority as the Spartans he’s singing about.

Songs like Don’t Come Crying To Me, Afterlife and War Machine are “bad ass rock and roll songs” in every sense of the phrase.  From the stomping guitar riffs and pulsating drums to the grinding bass lines and commanding yet clear vocals.  This is the sort of thing that Afterlife excel at, they really do know how to write honest rock songs and aren’t afraid to give a gentle nod towards their influences whilst retaining their own sound.

Neverfade and Freedom are a departure from the heavy, meaty sound of earlier songs, but they are in no way any less powerful.  Neverfade is an arena sized rock ballad being performed by a band you’ll be able to see at your local club (soon hopefully!!).  If Afterlife can get this song on to the radio, they won’t be able to keep up with the demand for people wanting to own it.  While Freedom is one of those songs that plays out so effortlessly with catchy riffs and hooks combining well with a commanding vocal performance that acts as a battle cry with the lines “I look around and say/ We are here to stay/ Because I’m free” which lets you know that this is a band united and only just getting started.

If you are familiar with anything that Steve, Al and Iain have done before, then yes you are going to spot similarities between the two and yes they are there, but they are so slight it’s more than forgivable.  Overall Alpha is an outstanding debut piece and as such I’m awarding it 9.5/10.

Alpha is available now as an independent release through I-tunes and Amazon.

So there I am, in Sri Lanka, formerly Ceylon, at about 3 o'clock in the morning, looking for one thousand brown M&Ms to fill a brandy glass, or Ozzy wouldn't go on stage that night. So, Jeff Beck pops his head 'round the door, and mentions there's a little sweet shop on the edge of town. So - we go. And - it's closed. So there's me and Keith Moon and David Crosby, breaking into that little sweet shop, eh. Well, instead of a guard dog, they've got this bloody great big Bengal tiger. I managed to take out the tiger with a can of mace, but the shop owner and his son, that's a different story altogether. I had to beat them to death with their own shoes. Nasty business really. But sure enough, I got the M&Ms and Ozzy went on stage and did a great show.
Previous Emily Witch from Witchsorrow, Bloodstock 2012
Next Headcharger interview at Bloodstock 2012 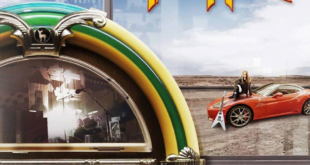